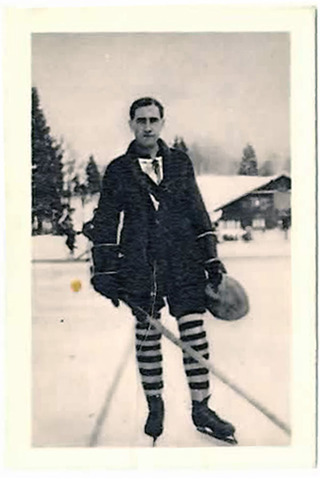 Watson began playing Hockey at the age of eight in Carman, In 1921 Watson was asked to play for the Winnipeg Junior Falcons of the Winnipeg and district Junior Hockey League.

In 1922 Watson entered the University of Manitoba to start his medical education, while at the same time play Ice Hockey for the university team, the Manitoba Bisons.

Watson became a star Hockey player with the University of Manitoba from 1922 through 1924, winning the Memorial Cup in 1923 with teammates Murray Murdoch and Art Chapman. Watson would lead the team in scoring during the 1923-24 season. The following season, Watson rejoined the Falcons, playing on the senior Winnipeg Falcon-Tigers club.

Watson would then travel to Vienna, Austria for a year of medical studies, where he finished his third year of doctorship, while also playing for the local club of Wiener EV.

Watson returned to Manitoba in 1926 to resume his medical studies, and joined the Winnipeg Winnipegs, helping the team win the 1927 Pattison Cup as Manitoba Senior Hockey Champions.

Watson then captained the 1927-28 University of Manitoba Grads Hockey club that won the Allan Cup as amateur champions of Canada. That same year, Watson also led the Winnipeg Eaton's to the "Big Four" championship of the Winnipeg Senior Hockey League.

Watson graduated from the University of Manitoba in June, 1929 as a Obstetrician, while also playing for the University Hockey team, and sharing the team scoring race with fellow teammate Dr. Gord McKenzie.

Watson returned to Vienna during the summer of 1929, and then played Hockey with his old team, Wiener EV during the 1929-30 season.

In 1931, while in Vienna, the now Dr. Blake Watson, joined his old teammates from the University of Manitoba, the University of Manitoba Grads, which went on a European Hockey Tour, sporting a record of 38 wins and 2 ties, and also represented Canada at the 1931 World Ice Hockey Championships in Krynica, Poland, winning the World Championship, and bringing home the Gold Medal back to Winnipeg.

Watson lived and played throughout Europe from 1925 to 1933. At various times he played for teams in Hungary, Switzerland, Austria, Vienna, Germany and Czechoslovakia, and was regularly asked to represent European Hockey All Star teams to play against travelling Canadian squads.

Watson returned to Canada in 1933, working as an assistant clinical professor at the University of Manitoba while also serving on staff at Winnipeg General Hospital.

In 1936 Watson relocated permanently to Southern California, where he established himself as a noted obstetrician for over 50 years. Dr. Watson had celebrity patients such as Greta Garbo, Rita Hayworth, Joan Fontaine, Carol Burnett, Paulette Goddard, Maureen O'Hara, Judy Garland and Elizabeth Taylor.

The above photo card was issued in Bulgaria in 1932 and the back loosely translates; "The Canadians are the best Hockey players in the world. They have proven this in numerous combat and between their Olympic victories. Tremendous speed and power are enormous in their play. As gleaming ice hockey player in the world is the canoe, Dr. Watson, the Hockey-King."