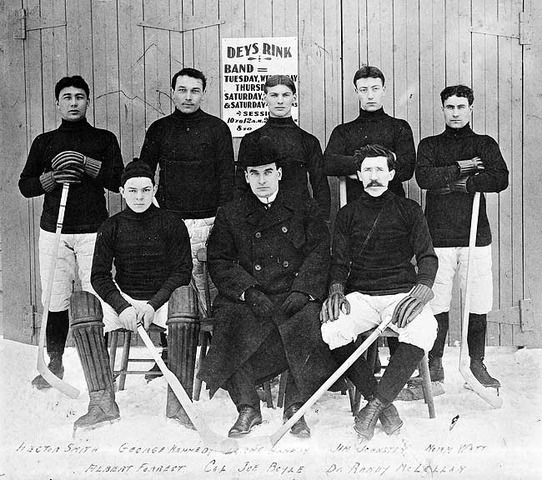 The Dawson City Nuggets were a hockey team from Dawson City, Yukon Territory, Canada that challenged the reigning champion Ottawa Senators, aka Silver Seven in January, 1905, for the Stanley Cup, and suffered the most lopsided single-game defeat in the history of Stanley Cup play.

Sponsored by the Klondike entrepreneur Joseph W. Boyle from men of the mining camps during the tailend of the Yukon gold rush, the Nuggets travelled an epic month-long voyage by dog sled, walking, bicycle riding (Dawson to Whitehorse), train (Whitehorse to Skagway), ship (Skagway to Vancouver), and train Vancouver to Ottawa) to reach Ottawa in time for the games. The team had only one bona-fide player, ex-Ottawa star Weldy Young, but he was unable to make it to Ottawa in time, delayed in Dawson City as an election official. Exhausted by the trip and without Young, they lost the first game of the two-game total goal series 9-2, and the second 23-2, in which Ottawa star Frank McGee set a record that still stands of scoring fourteen goals. The team then played a series of exhibition games in the East before returning to the Yukon.

The Nuggets participated in perhaps the most famous Stanley Cup challenge of all, against the Ottawa Hockey Club, a.k.a "The Silver Seven" in 1905. Dawson City had two former elite hockey players, Weldy Young who had played for Ottawa in the 1890s and D. R. McLennan who had played for Queen's College against the Montreal Victorias in the challenge of 1895. Other players were selected from other Dawson City clubs. Dawson City's challenge was accepted in the summer of 1904 by the Stanley Cup trustees, scheduled (inauspiciously) for Friday January 13, 1905. The date of the challenge meant that Young had to travel later as he had to work in a federal election that December, and meet the club in Ottawa.

To get to Ottawa, several thousand miles away, the club would have to get to Whitehorse by road, catch a train from there to Skagway, Alaska, then catch a steamer to Vancouver, and a train from there to Ottawa. On December 18, 1904 several players set out by dogsled and the rest left the next day by bicycle for a 330 mile trek to Whitehorse. At first the team made good progress, but the weather turned warm enough to thaw the roads, meaning the players had to walk several hundred miles. The team would spend the nights in police sheds along the road. At Whitehorse, the weather turned bad, causing the trains not to run for three days, causing the Nuggets to miss their steamer in Skagway. The next one could not dock for three days due to the ice buildup. The club would find the sea journey treacherous, causing seasickness amongst the team. When the steamer reached Vancouver, the area was too fogged in to dock, and the steamer docked in Seattle. The team from there caught a train to Vancouver, and finally left Vancouver on January 6, 1905, arriving in Ottawa on January 11.

Despite the difficult journey, the Ottawa squad refused to change the date of the first game, only two days away. Otherwise, Ottawa was hospitable. The Klondikers received a huge welcome at the train station, had a welcoming dinner, and used the Ottawa Amateur Athletic Club's rooms for the duration of their stay. Young would not arrive in time to play for Dawson.

The first game started well for Dawson, being only down 3–1 at the half, but things turned ugly afterwards. Norman Watt of Dawson tripped Ottawa's Art Moore, who retaliated with a stick to the mouth of Watt, who promptly knocked Moore out hitting him on the head with his stick. The game ended 9–2 for Ottawa. The game left a poor taste in the Klondikers, complaining that several goals were offside.

Watt made the mistake of saying that Frank McGee wasn't that good as he had only scored one in the first game. McGee would score 4 goals in the first half of the second match and 10 in the second half leading Ottawa to a 23–2 score. Despite this high score, the newspapers claimed that Albert Forrest, the Dawson City goalie had played a "really fine game", otherwise the score "might have been doubled".