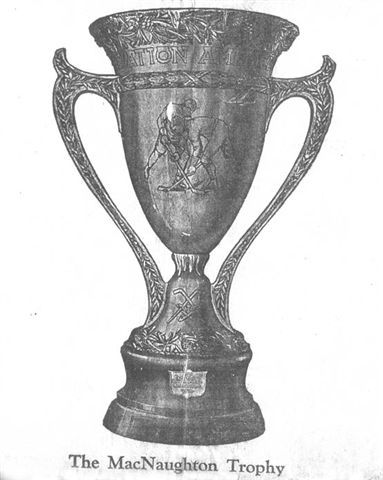 MacNaughton Trophy - The Cup was first won by the Cleveland Ohio Athletic Club, and remained with the American Hockey Association from 1914 until 1932. From 1933 to 1950, the Cup was played for only by semi-pro and intermediate hockey clubs in the Copper Country (in Michigan's Western Upper Peninsula) In 1951, MacNaughton's daughter and son in law, Mr. & Mrs. Endicott R. Lovell, arranged that the Cup be donated to the newly formed Western Intercollegiate Hockey League (WIHL) by the Calumet and Hecla Company. E.R. Lovell was president of the C&H Company at the time and an avid supporter of amateur ice hockey. The WIHL, composed of Michigan Tech, Colorado College, Denver, Michigan, Michigan State, Minnesota and North Dakota, awarded the trophy to its regular season champion until the WIHL was disbanded in March, 1958. After no league play the following season, the seven teams resumed formal competition in the 1959-60 season under the new name Western Collegiate Hockey Association (WCHA) and awarded the Cup to the regular season champion from 1960 to 1982. (In 1962, 1963, 1964 and 1965 the Cup went to the WCHA's playoff champion.) Michigan Tech left the WCHA for the 1981-82 season and joined the Central Collegiate Hockey Association they took the MacNaughton Cup with them and presented it to the CCHA's regular season winner. When Michigan Tech returned to the WCHA in the 1984-85 season, the Cup returned to WCHA also, as Michigan Tech is the trustee of the MacNaughton Cup, the most historic trophy in college hockey. Michigan Tech has won the MacNaughton Cup seven times.