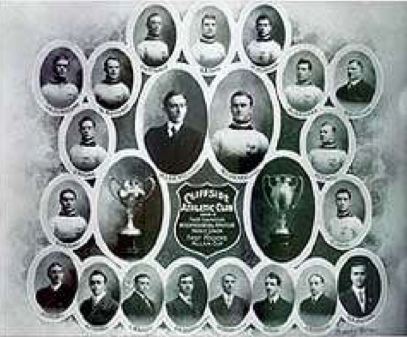 The Allan Cup was presented in Feb 1909 and Ottawa clinched the Inter-Provincial League title on Mar 6,1909 by beating the Montreal Amateur Athletic Association / Montreal Hockey Club 9 goals to 7 to win the 1st Championship for the Allan Cup

NOTE
The first Allan Cup was simply presented to the Ottawa Cliffsides as champion of the league they were in (the Interprovincial League), much in the same way the first Stanley Cup was 1st awarded to the Montreal AAA.

In the early days, the Allan Cup was a challenge cup, just as the Stanley Cup was, so it appears there was often more than one championship series in a year.

On Mar 15,1909 they lost the challenge to Queens University
Thus there were two winners of the Cup in 1909