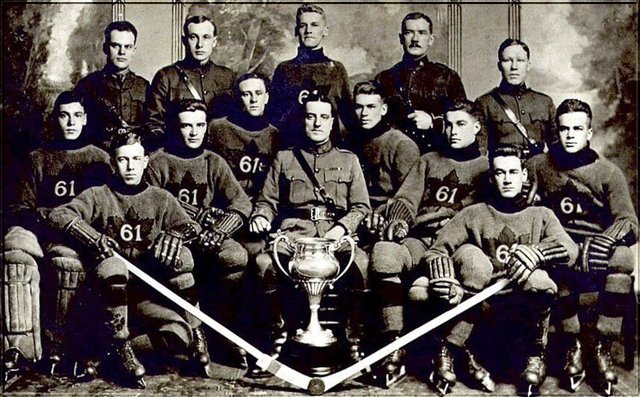 The 61st Overseas Battalion challenged the Winnipeg Monarchs who were the Allan Cup holders to a 2 game total goal series, winning game one 5-3 on February 24, losing game two 7-6 on February 28 and winning the series 11-10 on total goals, being awarded the 1916 Allan Cup championship.

The 61st Overseas Battalion then received 3 challenges from other teams.

1st challenge on March 2 from Winnipeg Victorias, a 5-3 win for 61st Overseas Battalion, who also won the Winnipeg Patriotic League championship with this victory.

2nd challenge from Fort William who were Thunder Bay Senior champions in a 2 games total goal series. March 11 a 4-1 Battalion win and March 13 a 5-4 Fort William win, but a 8-6 total goals win for 61st Overseas Battalion.

3rd challenge from Regina Victorias who were the Saskatchewan senior champions in a 2 games total goal series. The 61st Overseas Battalion won games on March 16 (5-1) and March 18 (8-2) in a 13-3 total goals win.

After the war Jocko Anderson would win a Stanley Cup with the Victoria Cougars in 1925.

Four members of the battalion team would eventually make it to the National Hockey League / NHL including John 'Crutchy' Morrison, Emery 'Spunk' Sparrow. The fourth was the great 'Bullet Joe' Simpson; he played six years for the New York Americans, won a Stanley Cup with the Americans and was elected to the Hockey Hall of Fame.