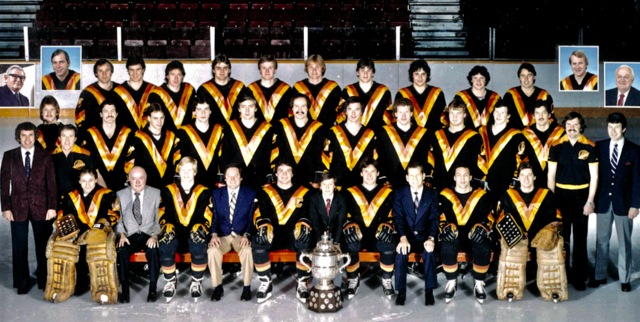 The Canucks were having sub-par season (24-33-14) going into the final road-trip of the season, a 3 game eastern swing starting with a 6-6 tie in Washington, won a rare victory at The Forum vs the Canadiens 4-2 and then the 3-3 tie at Colisée de Québec vs the Quebec Nordiques where a fan took a swing at Tiger Williams late in the game while he was checked and held against the boards, Coach Harry Neale jumped into the stands along with a couple of other Canucks to grab the guy and a small rumble took place, which also required police help. Neale got suspended by the NHL, so Captain Video Roger Neilson stepped in as coach of the Canucks. Vancouver then finished the season on a winning streak 5-0-1, going into the playoffs with a hot goalie and team confidence.

Kevin McCarthy, team captain broke his ankle during a practice at Britannia Rink in EastVan the day before playoffs started. He joined Rick Lanz and Jiří Bubla, as all 3 were top defencemen, now in leg casts and not available to play.

Stan Smyl was selected to wear the "C" as captain of the Canucks, something he would wear until 1999.

Smyl and Gradin led the Canucks in playoff scoring with 9 goals each, but Gradin had 10 assists to 9 for Smyl.

Smyl was the only Canuck to play every game during the season, 80 and 17 playoff games.

PLAYOFF HIGHLIGHTS
Game 2, 1st round vs Calgary..... Tiger Williams scores the OT winner at 14;20 of the 1st overtime for a 2-1 victory and then he did his dance and rode his stick down the length of the ice at the Pacific Coliseum with the hometown fans going crazy. Canucks won the 1st round in 3 straight.

Round 2 vs Los Angeles Kings.
Darcy Rota Quote - “I remember in that series that a fire alarm went off at our hotel, a Marriott by the L.A. airport, at about 2 or 3 a.m. Most of the team followed instructions, and rushed out to gather in the hotel parking lot. We look up on the hotel roof, and who’s up there, poking his head over the ledge, but Tiger Williams. I love Tiger, he’s a great teammate and a fierce competitor, but he’s a little different with his thought processes. I think he came down from the roof eventually.”

Jim Nill Quote - “We even had a theme song by that point: ‘Na Na, Hey Hey, Goodbye.’ We always had music in the dressing room before we went out for the start of games, and at the beginning of playoffs, someone grabbed it and put it on, and we all liked it. Then they began playing it in the arena, and on radio stations, too. We were very superstitious, so it became our rallying song and went with us the rest of the playoffs, and we’d crank it up real loud. It was a big part of our journey.”

King Richard is playing awesome playoff Hockey and the Canucks win the series 4-1.

Game 2 on April 29 would be the root to make the white household towel famous, and now most sporting teams give towels on seats at playoff games.

Late in the game on April 29th at Chicago Stadium, Canucks coach Roger Neilson, frustrated by all the penalties given to Vancouver, put a white towel from the bench on the blade of a Hockey stick and lifted the stick in the air, like a surrender gesture. He was joined by Smyl, Tiger Williams and Gerry Minor, Coach Neilson, Williams and Minor were ejected from the game, but not Smyl for some reason. Chicago won the game 4-1.

Returning home for game 3 at the Pacific Coliseum in Vancouver, the Canucks had no idea how many of their fans agreed with Neilson's white towel gesture. Along with the help of CKNW radio promoting the idea and also printed thousands of their own small white towels at t-shirt shop in Gastown, and giving them out at the arena if you didn't bring one......"Towel Power" was born.

The Canucks entered the ice to 16,000 plus fans waving white towels at the Pacific Coliseum and were rewarded with a 3rd period goal by Stan Smyl, their captain, which was the game winner 4-3.

Canucks won game 4 and then thumped the Black Hawks back at Chicago Stadium 6-2, leaving a classic image of Ron Delorme holding a blood soaked Grant Mulvey, Chicago's tough guy by his jersey, like he was asking if he wanted more of a beating. Vancouver won the series 4-1 and Clarence S. Campbell Bowl Champions

Stanley Cup Final
Here is great quote from legendary broadcaster Jim Robson “The Canucks had to travel right from Chicago to Long Island to play for the Cup. Not only that, but the only two hotels anywhere near the arena were a Holiday Inn and something called the Island Inn, and they had both been booked solid by NHL people. So the Canucks had to stay unbelievably far away, a couple of hours from the Coliseum. They had terrible accommodations, were exhausted from three rounds of playoff hockey, and were playing one of the greatest dynasties in history. To say they were the underdog would be an understatement.”

Well the Canucks lost in 4 games straight, only the 1st game were they ever in a game vs the Islanders, who won the Stanley Cup at the Pacific Coliseum on May 16th.

Funny Thing is Vancouver held a massive parade in their honour, from Robson Square, down Burrard St. in open convertibles and horses to Sunset beach, where there was a large stage with live music and most of the Canucks got up and spoke to the crowd...........many of those players from 1982 remain Hockey Heroes in Vancouver.

The Canuck Mobile was also born, and White Towel Power is worldwide now.