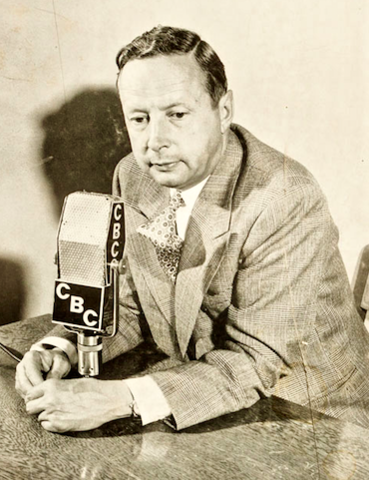 Foster William Hewitt, OC - Born November 21, 1902 in Toronto, Ontario – Died April 21, 1985 in Scarborough, Ontario was a Canadian radio broadcaster most famous for his play-by-play calls for Hockey Night in Canada.

Early life and career
Born in Toronto, Ontario, Hewitt attended Upper Canada College and the University of Toronto. Prior to that, he attended Blessed Trinity Catholic Secondary School in Grimsby, Ontario. He was a champion boxer in his student years, winning the intercollegiate title at 112 pounds. Hewitt developed an early interest in the radio and as a teenager accompanied his father, W. A. Hewitt, on a trip to Detroit, Michigan to see a demonstration of radio technology sponsored by General Electric.
He took a job with Independent Telephone Company, which manufactured radios, and left that job and university when his father—the sports editor of the Toronto Daily Star—told him that the Star was going to start its own radio station. Hewitt became a reporter at the paper, and was ready to go on the air when CFCA was launched. CFCA's first hockey broadcast was on February 8, 1923, although it was colleague Norman Albert who performed the play-by-play. Hewitt's first broadcast likely was February 16, of a game between the Toronto Argonaut Rowing Club and the Kitchener Greenshirts. Hewitt recalls the date as March 22 in his own book, but there was no game that night at the Arena Gardens. Hewitt's book mentions his first broadcast as being of a game between Parkdale and Kitchener, and the Argonaut Club is based in Parkdale, a neighbourhood of Toronto. He also mentions the game as going into overtime which the Argonaut-Kitchener game did.
On May 24, 1925, Hewitt and his father made what was said to be the world's first broadcast of a horse race. In 1927, he was invited as guest announcer to broadcast the first game from the new Detroit Olympia. Hewitt was part of the opening night ceremonies for Maple Leaf Gardens in November 1931, and the broadcast gondola where Hewitt would broadcast from was brought into the plans with his input, and the blessings of then Leafs owner Conn Smythe.

Hockey Night in Canada
For forty years, Hewitt was Canada's premier hockey play-by-play broadcaster for the General Motors (later Imperial Oil) Hockey Broadcast on Saturday nights. This show on Canadian national radio featured the Maple Leafs from Maple Leaf Gardens, and Hewitt became famous for the phrase "He shoots, he scores!" as well as his sign-on at the beginning of each broadcast, "Hello, Canada, and hockey fans in the United States and Newfoundland." (Newfoundland was an independent Dominion before joining Canada in 1949.)
Hewitt's Hockey Night in Canada broadcasts were simulcast on television until 1963 when he handed over the television broadcasts to his son, Bill Hewitt. In 1951, he started his own radio station in Toronto, CKFH, initially at AM 1400 kHz, until moving to 1430 in 1959. The station carried Leafs games until losing the rights in 1978. In 1981, the station was sold to Telemedia and was renamed CJCL.

Hewitt had retired from television in 1963, but continued to appear on radio. In
1965, he became one of a group of owners of the WHL Vancouver Canucks, a minor professional Hockey team. The following year, he and co-owner Cyrus McLean made a presentation to the National Hockey League asking the league to award them an NHL franchise, but their bid was rejected.

Hewitt came out of retirement to broadcast the 1972 Summit Series (with colour commentator Brian Conacher).

Hewitt was inducted into the Hockey Hall of Fame as a builder in 1965.

The Foster Hewitt Memorial Award from the Hockey Hall of Fame is named after him, as is the media gondola at the nearby Air Canada Centre.
Hewitt's original gondola from Maple Leaf Gardens was dismantled, then dumped into an incinerator in August 1979 to make room for private boxes, under the MLG leadership of Harold Ballard.