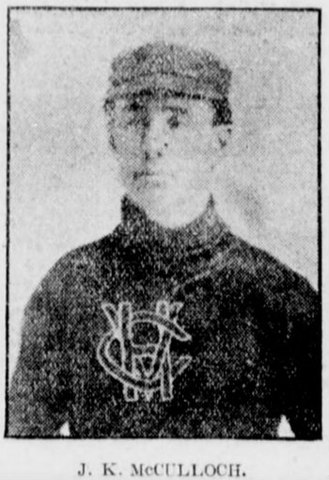 In 1889 and 1890, McCulloch helped found the Winnipeg Victorias Hockey club. He took part in the first scheduled game of organized Hockey in Manitoba on December 20, 1890. He later travelled east with the Victorias in 1893 as they toured Ontario and Quebec. McCulloch was one of the stars as the team won nine of eleven games, outscoring their opponents 76-36. While playing with the Victorias, he helped the team become Champions of Manitoba and Northwest Territories.

McCulloch was most famous for his speed skating ability. A Manitoba champion in 1890, McCulloch won the Canadian amateur title in 1893 and the American amateur crown in 1896. That same year, he held the distinction of being the only man to have ever held both the Canadian and American championship at every distance. In 1897, McCulloch reached the pinnacle of his career as he won four events at the world amateur championship meet in Montreal, Quebec. After turning professional in 1898, McCulloch travelled across North America and gave exhibitions in trick skating or competed in speed and figure skating until 1907.

McCulloch's knowledge of equipment led him to manufacture bicycles and ice skates and, by the turn of the century, his innovative tube skate gained widespread popularity among top Hockey players in Canada and the United States.. His Winnipeg establishment manufactured the McCulloch skate, one of the first tube skates used by Hockey players and speed skaters.

Jack McCulloch was inducted into Canada’s Sports Hall of Fame in 1960.

John K. “Jack” McCulloch was inducted into Manitoba Sports Hall of Fame in 1984