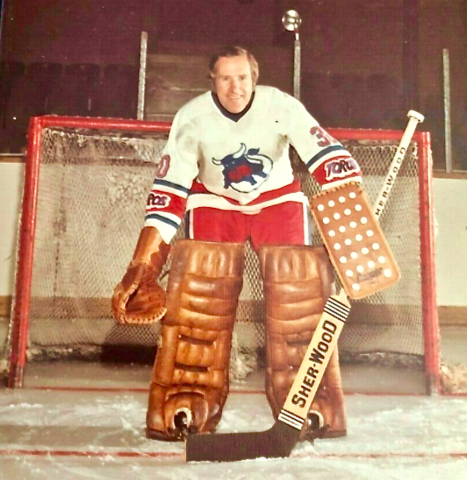 Binkley played his junior Hockey with the hometown Owen Sound Mintos in 1949, and then the Galt Black Hawks from 1951 to 1954, and also a 8 game stint with the Kitchener Greenshirts at the end of the season in 1954.

Binkley then spent the 1954-55 season playing senior Hockey with the Walkerton Capitals and the Kitchener-Waterloo Dutchmen before turning pro.

Binkley then started a long career in the minor leagues, and played in four different leagues (IHL, EHL, AHL & WHL) from 1955 to 1967.

Highlights of this stage of his career included leading the Eastern Hockey League / EHL in wins in 1957 and 1958, and also helping the 1956-57 Charlotte Clippers to the EHL championship, playing in all 64 regular season games along with all 13 in the playoffs.

Binkley played most of his Hockey in those years with the American Hockey League / AHL Cleveland Barons, where he had been a spare goalie and trainer on the team, before his big break came, when in 1961, starting goalie Gil Mayer got hurt and Binkley played in the last 8 games of the season - going 4-1-1 with a 1.47 GAA., and also 4 playoff games too.

Impression was made, and Binkley was now the Barons starting goalie for the next 5 years. Binkley was the recipient of the Dudley "Red" Garrett Memorial Award as the AHL's top rookie in 1962, and was awarded the Harry "Hap" Holmes Memorial Award four years later in 1966 for allowing the least goals in the AHL league, with a 2.93 GAA over 66 games. His team even reached the Calder Cup finals before falling to the Rochester Americans.

When the NHL expanded to 12 teams, Binkley finally got his shot at the big leagues, when he was traded to the Pittsburgh Penguins in October, 1967 by his current team, the WHL San Diego Gulls, where he had been selected on the Second All-Star Team in the WHL.

Binkley was the first number-one goaltender in the history of the Pittsburgh Penguins, and was the first ever player signed by the Penguins and was not part of the NHL expansion draft.

In his first year, Binkley put up outstanding numbers with a 2.88 goals against average and six shutouts over 54 games. Over his first two years with the Penguins, Binkley saw the bulk of action as the team’s number one goalie. By 1969-70 and 1970-71, he was reduced to Al Smith’s backup. In 1971-72, Jim Rutherford took over the number one job with Pittsburgh.

In 1972-73 Binkley sought a new challenge with the Ottawa Nationals of the newly formed World Hockey Association / WHA and remained with the franchise when it relocated to Toronto the next season, becoming the Toronto Toros. Although his minutes played were down, Binkley was a solid veteran presence on the club.

Binkley has found memories of the WHA.

"I found it to be one of the toughest leagues, if not the toughest, that I ever played in, and that includes the NHL. And I'm an expert in leagues because I played in almost every pro league in the minors and majors, except for the Central.

"The reason I found it tougher is because they had a lot of good talent and it was a very wide-open league as far as play went. And that kind of play always makes life interesting for a goalie. And we lead very interesting lives."

Binkley was also part of a little Hockey history, when on March 24, 1975, the Toros owner had arranged for Evel Knievel to take 4 shots on Binkley during the intermission between periods. Each goal Knievel got was worth 5 thousand, while each save Binkley made was worth 1 thousand. Knievel had played some minor-pro Hockey before he became Evel, so he knows the game.

Wearing a No. 13 Toros sweater, Knievel managed to score twice, including a deke that went awry, and skate away with 10 grand. “I made my two saves, got $2,000 and Evel made back his travel money,” Binkley remembers.“ I put my cash toward a good team party.

Binkley retired in 1976 after playing most of the year in the North American Pro League with the Buffalo Norsemen.