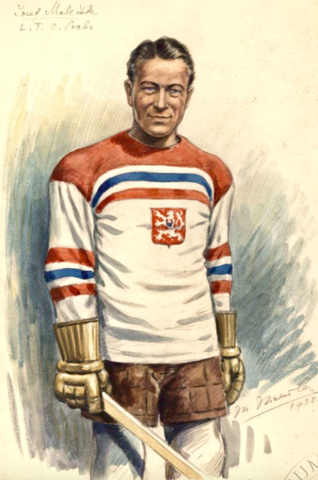 Maleček played his early club Hockey for HC Sparta Praha (founded by his father and uncle in 1909) from 1914 to 1927, becoming a major part of the early development of ice Hockey in Czechoslovakia. Maleček also made his national team debut at age 17.

The only European teams that could beat LTC were a few French and British clubs loaded with Canadian players.

LTC was the only team to beat Canadian teams touring Europe - Saskatoon Quakers (1-0), and tied the Ottawa Shamrocks (1-1) and Sudbury Wolves (1-1) The Swedish national team was unable to beat LTC in the three games that they played against each other in the 1930's.

At eight World Championships between 1930 and 1939, he led Czechoslovakia to two bronze medals in 1933 and 1938. Maleček represented Czechoslovakia at 14 World and European Championships and three Olympic Winter Games in 1924, 1928 and 1936. In 1932 he couldn't play due to a broken leg injury sustained in a skiing accident. That was the only time he was absent from the national team in a 17 year span.

Maleček was the king of European Hockey, considered the best pre-War European player. He excelled in movement and puck skills and constantly dazzled the crowds with his talent. He was in fact so good that several of the touring Canadian teams in Europe during the 1930's wanted to bring him to Canada. Some of the players who had NHL experience said that he was good enough to play in the NHL. No other European player at that time got such fine reviews from the Canadians.

After the European Championship in 1931, in which he became the top goal scorer, the NHL New York Rangers offered him a professional contract. He refused it. In the mid-war rich Czechoslovakia, that was nicknamed as "the little America" (USA), there was not any reason to leave his country.

Maleček centred his wingers Jiří Tožička and Karel Hromádka. They were the best line in Europe for both LTC Praha and the Czech National team during the 1930s. Maleček was the main scorer, and there are some statistics that have him scoring 1,708 goals in 684 games.

Josef Maleček is considered the first 1,000 goal scorer in ice Hockey and was attributed with over 250 hat tricks.

In 1941, Maleček changed his preferred position from forward to defense.

Toward the end of his career, Maleček played for HC Slovan Bratislava and as a playing coach with HC Davos, Crans-Montana and Krefelder EV 1936.

Josef Maleček was inducted in the IIHF Hall of Fame in 2003.

Josef Maleček was inducted in to the Czech Hockey Hall of Fame in 2008.