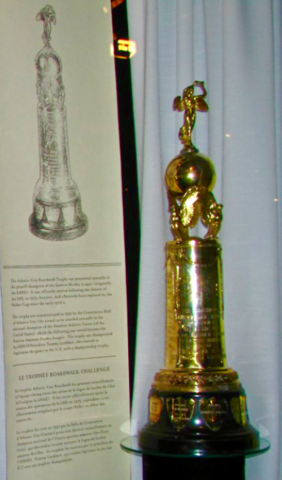 The resort owners and hotel managers of Atlantic City created a brass trophy decorated with eagles and winged angels, to be awarded to the 1932 Amateur Athletic Union / A.A.U. Hockey tournament winner.

Engraved on the front - THE BOARDWALK CHALLENGE TROPHY

Is the second oldest trophy in pro Hockey, behind the Stanley Cup.

NOTE - Between 1938 and 1945, the EAHL had a three-round season. Teams first played for the Hershey
Cup, a spherical award originally given to the Tri-State Hockey League by the Hershey candy company. Then came a tournament for the Boardwalk Trophy. After all that, the teams played another series for the Walker Cup (Mayor Walker Trophy). The team with the most cumulative points was declared the league champion.