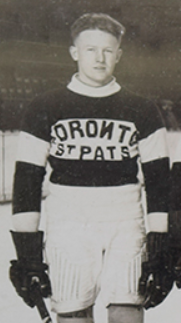 Stackhouse played for the Acadia University from 1913 to 1919, while also playing for his local Wolfville YMCA. The New Glasgow Hockey Club (Tigers) also used the services of Stackhouse for a number of games between 1916-1918.

Stackhouse then joined the Wolfville AAA for the 1920-21 season, and was signed as a free agent by the NHL Toronto St. Pats, December 23, 1921 playing in 13 regular NHL season games for the St. Pats, and 5 playoff games, including the Stanley Cup finals vs the Vancouver Millionaires.

Stackhouse returned to Nova Scotia for the 1922-23 season, playing with the Amherst Ramblers and Sydney Millionaires.

Stackhouse was involved in being a referee for a couple of seasons between 1923 and 1925.

Stackhouse is next recorded as playing with the Manchester New England, a team in the New England Amateur Hockey League / NEHL in 1925. He then joined the NEHL Nashua Nationals for the 1926-27 season, helping the Nationals win the NEHL championship in 1927, and was selected to the NEHL First All-Star Team.
Stackhouse also played 5 games for the Providence Reds of the Canadian-American Hockey League / Can-Am during the 1926-27 season.

Stackhouse played 1 more season for the Nashua Nationals, but the (NEHL) league collapsed in 1928, and Stackhouse is presumed to have retired after.

Ted Stackhouse was inducted into the Nova Scotia Sport Hall of Fame.