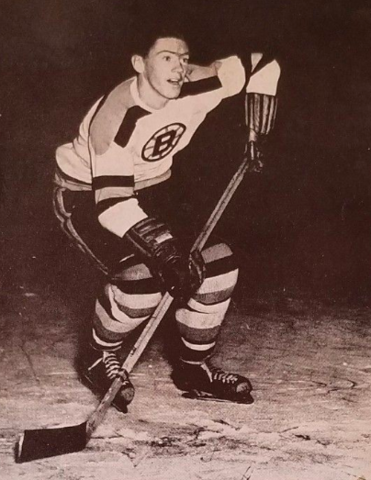 Labine played his first junior Hockey with the St. Michael's Majors, and after having a solid year with the Majors in the 1949-50 season, in which he scored 22 goals, 22 assists in 47 games, Labine was traded to the Barrie Flyers for the 1950-51 season.

Labine had a career best junior season in Barrie, scoring 32 goals, 46 assists during the regular season, and then led the Flyers with 13 goals, 13 assists in the Robertson Cup playoffs, producing at over two points per game, and then another 12 goals, 13 assists during the Memorial Cup playoffs, as the Barrie Flyers were crowned 1951 Memorial Cup champions.

Labine turned pro with the Hershey Bears of the American Hockey League / AHL at the start of the 1951-52 season, having a solid year, scoring 23 goals, 23 assists during the season, but also started to be known as a tough, trash talking player, and was penalized 88 minutes in 53 games for the Bears. Labine also made his NHL debut in the spring of 1952, playing in 15 games for the Boston Bruins, scoring 2 goals, 4 assists, and then in the playoffs vs the Montreal Canadiens, Labine playing in his 5th ever playoff game, layed out Rocket Richard with a hit that left him unconscious in the 1st period. The Rocket would return late in the 3rd period, and scored the semi-final series winner on Sugar Jim Henry. The after-photo of Rocket, (bleeding from his face) who always claimed not to remember the moment due to getting knocked out by Labine, and a respectful Henry is one of the most famous photos in Hockey history. Labine also played 5 playoff games for the Bears that season.

Labine with his rugged, spectacular style, quickly established himself as a regular in the Bruins lineup the following season, while also playing 19 games for Hershey too.

By the 1953-54 season, Labine was a full-time Bruin, scoring 16 goals, 19 assists during the season, but his best NHL season would be during the 1954-55 season, in which he got a nickname 'Haileybury Hurricane" as on the night of November 28, 1954, Labine went into Detroit's Olympia stadium and had a career night. "I had one of my better games," he stated with modesty. "I think I had three goals and three assists. I got five of them in one period (still a Bruins record).

Labine would also lead Boston in scoring that season with 24 goals, 18 assists, and won the Elizabeth C Dufresne Trophy, given to the Boston Bruins player voted most outstanding during home games.

Labine would play for the Bruins from 1952 to 1961, having his best seasons playing on Boston's top power unit with his long-time partner Real Chevrefils and smooth, crafty centre Don McKenney.

Labine was traded to the Detroit Red Wings with Vic Stasiuk for Gary Aldcorn, Murray Oliver and Tom McCarthy, January 23, 1961, and would play in Detroit until 1962 (75 games), finishing the 1961-62 season with the Sudbury Wolves of the Eastern Professional Hockey League.

Labine was traded to the Los Angeles Blades of the Western Hockey League / WHL) by Detroit for cash, July, 1962, and in the 1962-63 season, his first year with the Blades, Labine tied for tenth in the league with 47 assists and tied for ninth with 77 points. The following year, he finished tenth with 31 goals, tied for seventh with 46 assists and placed sixth with 77 points. Los Angeles fell in the WHL finals to the San Francisco Seals in six games. Leo led the Blades in the playoffs with ten goals and 12 assists for 22 points over 12 games.

1965-66 was the last year Labine had a true impact with Los Angeles. His 33 goals tied him for seventh in the WHL with teammate Willie O’Ree.

Labine retired from Hockey after the 1966-67 season with the Blades.

When discussing his Hockey career years later, Leo was quoted as saying, “I was lucky to get out of the game alive (Rocket Richard Hit). I was a little aggressive sometimes.” When remembering his playing days Rocket Richard was asked the players he hated to play against the most. The three players mentioned were Leo LaBine, Ted Lindsay and Tony Leswick, pretty select company for Leo to keep, an honor he richly deserved. Labine was the visiting player that was booed harder than any other player visiting the Montreal Forum.

Never a Stanley Cup champion, Labine played in the finals on three occasions. With the Bruins, Labine came up against the Montreal Canadiens dynasty in consecutive seasons, 1956-57 and 1957-58. The first year, the Bruins were eliminated in five games and the second year saw the series go six games. In 1960-61 with the Red Wings, Detroit fell in six to the Chicago Blackhawks in the finals.

Leo loved and lived for Hockey. He also enjoyed golf and pitching fastball for H.E. Brown Supply Co., winning several local and provincial championships in the 50's and 60's.