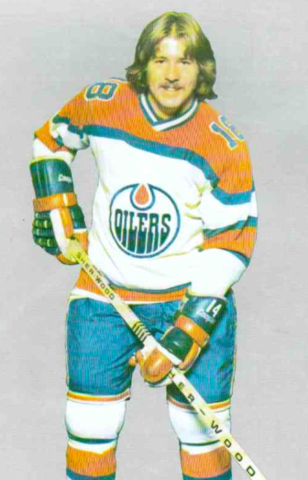 Rodgers decided to sign with the WHA Oilers, as he would be playing in the league right away, besides, along with a decent salary, Rodgers was given a $40,000 signing bonus, and a shiny-new Dodge Charger.

Rodgers played for the Oilers for just over a season and a half until he was traded to the New England Whalers with future considerations for Wayne Carleton, January, 1976.

In New England, he found a real home. His numbers began to increase on the strength of his emerging confidence and skill. His success was based on his quick skating, good shot, which he could release off-stride, and his ability to dart and spin into the corners against bigger wingers while emerging with the puck. Of course, having Gordie and Mark Howe on his line helped as well.

In 1979, New England joined the NHL and became the Hartford Whalers. In the process, Rogers expected to be claimed by the Canucks who still held his rights. But GM Harry Neale committed the error of his career by not claiming the feisty little spark plug. So Rogers remained a Whaler, but to his surprise, was offered only a two-way contract.

To make it at the NHL level, he'd have to prove himself again. This time he got some help by centering a line with Pat Boutette and Blaine Stoughton. The trio, known as "The Stash-Dash-Bash Line" clicked as Rogers soared to the upper echelon of league scoring with 105 points during both of his two NHL campaigns with Hartford. The second season, he was captain of the Whalers.

But in 1981, the Whalers went shopping for more defenseman, using Rogers as collateral. He was traded to the New York Rangers with Hartford's 10th round pick (Simo Saarinen) in 1982 NHL Draft for Chris Kotsopoulos, Gerry McDonald and Doug Sulliman, October 2, 1981.

In his first season with the Rangers, Rodgers continued his scoring prowess, with 38 goals, 65 assists, putting him in elite company in that he is one of only four players to have scored 100 or more points in his first three NHL seasons, the others being Wayne Gretzky, Mario Lemieux and Peter Stastny.

At the start of his 5th season with the Rangers, Rodgers as sent to the AHL to play for the New Haven Nighthawks. Shortly thereafter he was traded to the Edmonton Oilers for Larry Melnyk and Todd Strueby, December 20, 1985, where he played briefly before heading back to the AHL with the Nova Scotia Oilers where he finished the year.

In 1986-87, Rogers played one season with Ambri-Piota in Switzerland and then retired.

Rogers was the colour commentator for the Calgary Flames on Calgary radio stations for 12 years before announcing his retirement on July 25, 2013.

Mike Rodgers was inducted into the Alberta Hockey Hall of Fame in 2016.