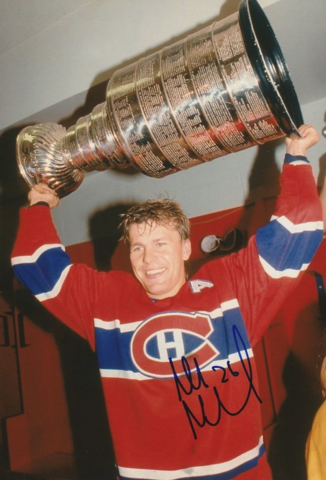 Näslund played his early Hockey for his hometown club of Timrå IK, debuting in the Elitserien in 1976, and first represented Sweden at the 1977 IIHF European Junior Championships, where Sweden won the Gold Medal in the U18 category. Näslund scored 9 goals, 3 assists in 8 games.

Näslund played one more season for Timrå IK in the 1977-78 season, and would represent Sweden again, this time at the 1978 World Junior Ice Hockey Championships, with Sweden taking the Silver Medal, and Näslund scoring 2 goals, 8 assists while also being voted to the Media All-Star Team with Wayne Gretzky, Anton Stastny, Risto Siltanen, Slava Fetisov & Alexander Tyzhnych.

Näslund was chosen 37th in the 1979 NHL Amateur Draft by the Montreal Canadiens.

It was during the 1979-80 season when Näslund really came into his role as a top forward - a goal scorer. Näslund scored 18 goals, 19 assists during the regular season, then his Brynäs IF team would win the Le Mat Trophy as 1980 Elitserien (SHL / Svenska Hockeyligan) champions, scoring 2 goals, 2 assists in 7 games. Näslund also played for Sweden in the 1980 Winter Olympics, winning the Bronze Medal, with Näslund scoring 3 goals, 7 assists in 7 games played in Lake Placid, New York.

Mats Näslund was awarded the Guldpucken (The Gold Puck) as the ice Hockey player of the year in Sweden in 1979-80 season.

The next season 1980-81, Näslund would lead the Elitserien (SHL / Svenska Hockeyligan) in assists (25) and points with 42. One of the highlights of Näslund's career was in the spring of 1981, when Sweden hosted the IIHF World Championships, with the home team taking the Silver Medal.

Näslund finished his career with Brynäs IF during the 1981-82 season, scoring a career high with the team, 24 goals (42 points).

Näslund then joined the Montreal Canadiens for the 1982-83 season, and in his very first game, a exhibition game vs the Philadelphia Flyers at the Spectrum in Philadelphia, scored a hat-trick, and from that moment on he was "Le Petit Viking," the little Viking. Näslund sat out the first three games of his rookie season, but when Rejean Houle got injured, Näslund got his NHL debut which came against the Quebec Nordiques on October 11th 1982, and became the first European-born player to play for the Montreal Canadiens.

Näslund got his first NHL goal during his second NHL game vs Lindsay Middlebrook of the New Jersey Devils on October 13th 1982, and was named the games 2nd star. Näslund scored 27 goals, 45 assists in 77 games played for the Canadiens during his first NHL season, becoming the Canadiens' third leading scorer behind Guy Lafleur and Ryan Walter, who had 76 and 75 points respectively. Näslund was recognized as the left winger on the NHL All-Rookie Team that season.

Näslund had a fine season with the Canadiens during the 1983-84 season, scoring 29 goals, 35 assists in the regular season, and 6 goals, 8 assists in 15 playoff games, as the Canadiens made it to the Prince of Wales Conference finals, losing to the New York Islanders.

Näslund played for Sweden in the 1984 Canada Cup, losing to Canada in the finals, with Näslund scoring 2 goals, 3 assists in 8 games.

Another strong NHL season for Näslund in 1984-85, scoring 42 goals, 37 assists in the regular season, and 7 goals, 4 assists in the playoffs, as the Canadiens lost in the division finals to the rival Quebec Nordiques in overtime of game 7 at the Forum in Montreal.

In the 1986 Stanley Cup playoffs, Näslund was Montreal's top point-getter with 19 (8 goals), as the Canadiens won their twenty-third Stanley Cup championship.

Näslund was awarded the Viking Award in 1985 and 1986 as the best Swedish ice Hockey player in North America.

Näslund played for the Canadiens from 1982 to 1990, scoring 243 goals, 369 assists during the regular season, and earned a reputation as a true playoff warrior (Le Petit Viking), scoring a very respectable 34 goals and 57 assists in 97 playoff games.

While playing in Montreal. Näslund was an infrequent visitor to the penalty box. Never logging more than 19 penalty minutes in any season during his career, his gentlemanly play was recognized when he was voted the winner of the 1987–88 Lady Byng Memorial Trophy, beating Wayne Gretzky in the voting.

During the 1988 NHL All-Star Game, his five assists established a record, and he was instrumental in helping Mario Lemieux set the All-Star Game record with six points.

Because the World Championships occur at the same time as the Stanley Cup playoffs, Näslund was often not available to play for Sweden for the event during his best years in Montreal. His sole appearance as an active NHL player came in 1983.

Näslund left the Canadiens to return to Europe for the 1990-91 season, playing one year in Switzerland with HC Lugano, followed by three seasons back in Sweden with Malmö IF.

In 1994, Sweden won the Gold Medal at the Winter Olympics in Lillehammer, Norway, defeating Canada in a memorable shootout. Näslund shared the lead in the tournament with 7 assists during 8 games he played, and put the Olympic finals in Lillehammer as "my most memorable match" in the Tre Kronor (Sweden Jersey).

The gold medal victory on February 27, 1994 gave Näslund the distinction of having won the Stanley Cup, World Championship Gold Medal and Olympic Gold Medal Championship in his career, and along with teammates Håkan Loob and Tomas Jonsson, becoming the first members of the Triple Gold Club.

Näslund returned to the NHL to play for the Boston Bruins in the lockout shortened 1994–95 season (39 games), and retired from Hockey thereafter.

Näslund was the general manager for the Swedish national men's ice Hockey team, and helped construct the gold medal-winning team at the 2006 Winter Olympics.

Mats Näslund holds the distinction of being one of very few Swedish Hockey players to have won the Elitserien (SHL / Svenska Hockeyligan) Championship, an Olympic Gold Medal, a World Hockey Championship Gold Medal and a Stanley Cup Championship.

In April, 2015 Mats had his jersey retired and lifted into the rafters in his hometown arena - Eon Arena in Timrå, Sweden.