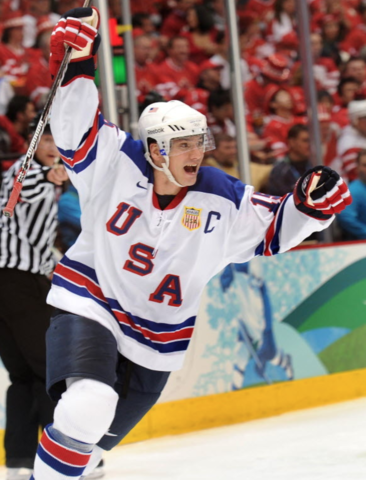 Langenbrunner would then forego playing his senior year of high school Hockey and instead play his next two seasons with the Peterborough Petes of the Ontario Hockey League / OHL, scoring 75 goals and 115 assists for 190 points in only 124 games. He additionally tallied 12 goals and 20 assists for 32 points in 18 playoff games.

In his second year in Peterborough (during the 1994–95 season), Langenbrunner made his NHL debut on April 9, 1995, skating with the Dallas Stars in a game against the St. Louis Blues, and played in 2 NHL games.

During the 1995–96 season, Langenbrunner played 59 games with the Michigan K-Wings of the International Hockey League / IHL, scoring 25 goals and 40 assists for 65 points while tallying 13 points in 10 playoff games. His impressive numbers earned him the team's MVP award and also got him called up to the NHL, where he played 12 games that year, scoring 2 goals, 2 assists.

Langenbrunner would become a NHL regular during the 1996–97 season, when he played 76 games and scored 39 points playing on the left wing. For his strong first-year efforts, he was the NHL Calder Trophy Finalist for Rookie of the Year.

During the 1997–98 season, Langenbrunner reached the 20-goal plateau, scoring 23 goals and 29 assists for 52 points while playing in 81 games. That year, Langenbrunner also represented his country at the 1998 Winter Olympics, though the USA fell short of winning a medal.

In the 1998–99 season, Langenbrunner played in 75 games, scoring 12 goals and adding 33 assists for 45 total points. However, his real breakthrough came in the playoffs that year, where Langenbrunner scored 10 goals and had 17 points in the playoffs, helping the Stars win their first Stanley Cup championship over the Buffalo Sabres. He was third in scoring for the Stars, behind Mike Modano and that year's Conn Smythe Trophy winner, Joe Nieuwendyk.

On March 19, 2002, Langenbrunner was traded with Joe Nieuwendyk to the New Jersey Devils for Jason Arnott, Randy McKay and a first-round draft pick.

The next season, in 2002–03, Langenbrunner had a then career-best 22 goals and 33 assists for 55 points in 78 games for the Devils. He continued his scoring numbers in the playoffs, leading the league in goals (11) and points (18) helping the Devils win the 2003 Stanley Cup championship in a 4–3 series victory versus the Mighty Ducks of Anaheim, while also becoming the Stanley Cup Playoffs Scoring Champion.

Langenbrunner had an injury plagued season in 2003–04 in which he played only 53 games and then joined ERC Ingolstadt of the Deutsche Eishockey Liga during NHL's lockout season in 2004–05.

Langenbrunner had a strong in 2005–06 season, scoring 53 points in 80 games. He again had a strong playoff performance, scoring 13 points in nine games before the Devils lost to the eventual Stanley Cup champion Carolina Hurricanes in the Conference Semi-finals.

During the 2006–07 season, Langenbrunner scored a career-best 60 points, where he also played in all 82 games that season, scoring 23 goals and adding 37 assists (both career bests). In the 2007 playoffs, Langenbrunner again played well, scoring eight points in 11 games before losing to the Stanley Cup Finals-bound Ottawa Senators.

On December 5, 2007, Langenbrunner was named captain of the New Jersey Devils. That year, however, Langenbrunner missed nearly 20 games to a groin injury and his stats dipped as he scored 41 points in 64 games. In the playoffs, the Devils lost in the first round to the New York Rangers 4–1, though Langenbrunner played well, scoring four points in the short series.

Beginning in the 2007–08 season, Langenbrunner played on a line with teammates Zach Parise and Travis Zajac. The line was dubbed "ZZ Pops" due to the difference in age between the veteran and the two youngsters who have initials with the letter "Z."

In January 2009, Langenbrunner scored two goals in each of three consecutive games, including three game winners for the Devils. Two of those game-winning goals were scored in overtime. His streak of three consecutive multi-goal games with a game-winning goal was last accomplished by Wayne Gretzky during the 1981–82 season. Langenbrunner played extremely well in the second half of the season and went on to set career highs in goals (29) assists (40) points (69) and plus-minus rating (+25). Langenbrunner, along with fellow linemates Zach Parise and Travis Zajac, all had remarkable seasons, as the line combined for 94 goals and 131 assists for a total of 225 points as well as having a combined plus-minus of +88.

On January 2, 2010, Langenbrunner scored the first hat-trick of his career while playing against the Minnesota Wild in his home state of Minnesota.

On January 7, 2011, Langenbrunner was traded back to the Dallas Stars for a conditional third-round pick in the 2011 NHL Entry Draft. The pick would become a second-round pick if the Stars either win a playoff round or re-sign Langenbrunner before the draft. Langenbrunner would score his first goal in his return as a Dallas Star in his 1,000th career game against the Los Angeles Kings on January 17, 2011.

Langenbrunner signed a one-year contract as a free agent with the St. Louis Blues on July 6, 2011. In his first season with the Blues, in 2011–12, Langenbrunner added depth to the team and was used primarily as a checking line forward, scoring six goals and 24 points in 70 games. He was re-signed to a one-year extension with St. Louis on July 10, 2012.

In the lockout-shortened 2012–13 campaign, Langenbrunner participated in only four games with the Blues, posting one assist before an ongoing torn labrum in his left hip required season-ending surgery on February 9, 2013.

On January 15, 2014, Langenbrunner announced his retirement after 16 seasons in the NHL.

Langenbrunner was widely credited for his impressive post-season performances, the most recent being the second overtime goal against the Ottawa Senators in the second round of the 2007 Playoff series. It was his 12th game-winning goal and his fourth career playoff overtime goal. His 12 playoff game-winning goals top notable Hockey Hall of Famers such as Mario Lemieux, Cam Neely and Paul Coffey and tie him with legends such as Phil Esposito and Mark Messier.