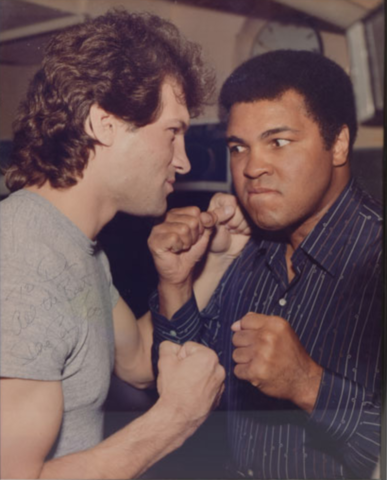 Biggest Hockey Fight of all time, well not quite, but a good fun bout for charity back in 1983, where "Muhammad Ali" the "Greatest Athlete Of All Time" actually rubbed Semenko's ass during the fight with his boxing glove, and Dave even laughed after it happened.

Ali sent one scout to watch Semenko work out, but apparently he was there more to deliver a message and warn Semenko "Make sure you don't do something stupid like try to take the champ's head off."

The exhibition boxing match was the idea of Mark Messier's dad - Larry, who was part of was part of Ali’s entourage, working public relations for him.

Messier, at the time, said Ali was doing it for charity and to show up Semenko. “He thinks, 'Who does Dave Semenko think he is, running around the NHL beating everyone up?’” claimed Messier.

How much was Ali was being paid for the fight. Everyone dodged the topic and Ali did as well “I’m not here for the money because you couldn’t afford to pay me,” he said. “I’m here because you all have followed me over the years and you can tell your grandchildren you did see him.”

Ali, who was 41 years old at the time, produced one of his singular poems for the Edmonton brawler:

But Semenko's starting to retreat/

If Semenko goes back an inch further/

He'll end up in a ringside seat."

The boxing match was at the Northlands Coliseum, and the two fighters entered the ring as “Eye Of The Tiger” played over the PA system.

From Semenko's autobiography Book (Looking Out For Number One) : "I didn't know what I was supposed to wear and didn't have a boxing wardrobe kicking around the house. I didn't have boots like Ali, so I got a pair of old black high-top runners. He had his zippered sweat suit to wear into the ring. I wore a crimson-and-silver terry-towel bathrobe. We hadn't even thought about it, but I'd been wearing the robe when they laced the gloves on me. So there we were, standing in our corner with the opening bell about to ring and I couldn't get the damned bathrobe off over those great big sixteen ounce boxing gloves. So Rocky stood real close to me, trying to block out everybody's view, while he hacked the sleeves off my bathrobe with a pair of scissors."

Six thousand fans attended the match, including celebrities like actor Jan Michael Vincent (Airwolf!), who was in Ali’s corner.

Ali did his famous "Ali Shuffle" among other showboating in the ring, all to please the fans. And Semenko had fun letting him do it.

The charity bout ended in a draw.

For Ali, the match is considered his final bout, although not his final time in a ring, as he took part in the first WrestleMania two years later.