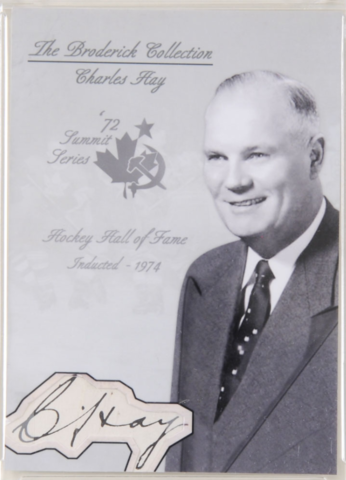 On the reverse of this card, it says;
The Broderick Collection
Charles Hay

Charles Hay is best known for his work with Hockey Canada and his efforts to organize the 1972 Summit Series. His son Bill played eight years with the Chicago Black Hawks and won a Stanley Cup in 1961.

In his early years, Hay played goaltender for the University of Saskatchewan Huskies and led the team to an Allan Cup final in 1921. After a long business career in the petroleum industry, he retired and began working with Hockey Canada, eventually succeeding Maxwell Bell as its president. During his time with Hockey Canada, Hay worked to develop programs for coach certification, student ice Hockey scholarships and Hockey research. He also provided administrative guidance and negotiations for the Summit Series. His administrative vision and the respect he was accorded in both the amateur and pro ranks made Hay a valuable part of this historic set of games.

Numerous honours were bestowed upon Hay. The University of Saskatchewan presented Hay with a honorary doctorate on May 20, 1965.

Charles Hay was elected into the Hockey Hall of Fame in 1974.