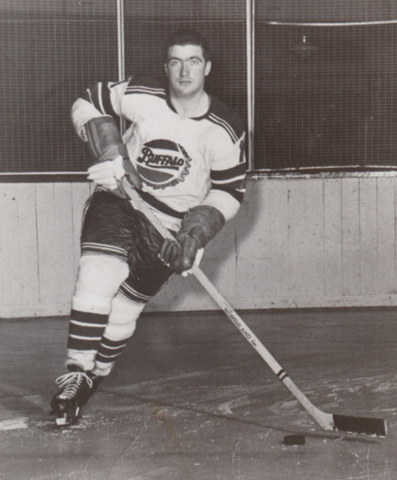 Sweeney played junior with the Guelph Biltmore Mad Hatters and led the Ontario Hockey Association / OHA with 106 points in 1956-57, helping the team win the J. Ross Robertson Cup as OHA champions in1957.

During his first two pro seasons he turned in consecutive 31 goal performances for the AHL' Providence Reds and Buffalo Bisons. In 1958 he was presented the Dudley "Red" Garrett Memorial Award as the top rookie in the AHL.

The next year he played four NHL games with the New York Rangers and began a run of eight productive years with the AHL Springfield Indians, winning Calder Cup championships in 1960, 1961 and 1962. During the early 1960s he terrorized AHL goalies and recorded three straight 100-point seasons. In 1961 he won his first of three consecutive scoring titles (an unprecedented and unequalled feat in the AHL) and was selected to the AHL first all-star team twice and the second team once.

Sweeney's rights were sold by Springfield to the Vancouver Canucks of the Western Hockey League early in the 1968 season; he played only 26 more professional Hockey games in his career. His final professional action was in the following season with the Rochester Americans of the AHL, in which he played ten games without a point.

Sweeney's final organized Hockey games was in 1970 with the Ontario senior league Oakville Oaks, where he scored 2 goals and 10 assists in 11 games.