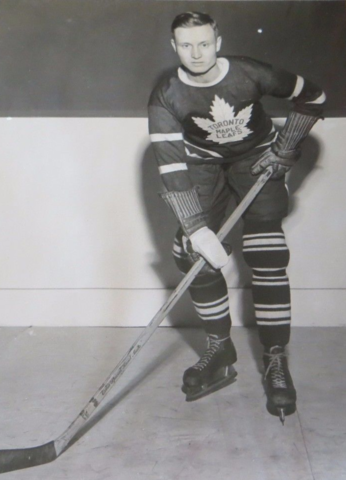 Mann joined the Toronto Marlboros Senior hockey team in 1933-34, and they won the Senior OHA championship. While playing Mercantile hockey in Toronto, Mann and his British Consols claimed the Mercantile championship in 1935.

Norm Mann signed with the Toronto Maple Leafs in 1935, and although he played that season with Syracuse Stars of the IAHL, the Leafs summoned Mann to join them for the playoffs. His first NHL experience was a single playoff game in 1936. Mann wouldn't return to the NHL until 1938-39, when he filled in for another Paris, Ontario citizen, Syl Apps, after the Leafs captain was injured. That stint lasted 16 games. Again, Mann was returned to the IAHL, and didn't see any additional NHL activity until 1940-41 when he skated in 15 more games during a rash of injuries to Leaf regulars.

It was the final look at the NHL for Norm Mann, who played several seasons in the AHL hoping for his shot in the big leagues before being reinstated as an amateur and playing hockey for fun until his retirement in 1949.