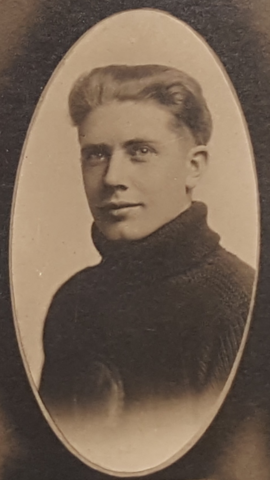 Goodman's childhood was spent at 761 Bannatyne Avenue in Winnipeg, and he attended Somerset School. He learned to skate at the old Winnipeg Arena and on corner lot rinks around the neighbourhood, and was first introduced to Hockey with the Young Men’s Lutheran Church junior squad. Goodman had been a speed skater before.

Goodman caught the eye of the Winnipeg Falcons team during the 1918-1919 season and was offered an invite to their team, he accepted, and joined them for the 1919-1920 season, in which they won the Manitoba Hockey championship and the Allan Cup (1920) and represented Canada at the 1920 Olympics in Antwerp, Belgium where they would win a gold medal in the first international ice Hockey competition. Following the victory, he was approached by some of his European rivals who were so enamored by his speed, they sought to buy his skates, certain that there were hidden motorized components inside. His speed was indeed exceptional, having won the Manitoba speed skating championship for three consecutive years (1918-1920), and Canadian Speed Skating Champion in 1920.

Goodman's successful speed on indoor ice helped revive the local speed skating sport, with the Winnipeg Speed Skating Club being formed shortly after his successes as Manitoba champion (1918-1920) as Canadian champion (1920). He received challenges from champion American skaters, as well as invites to the Dominion championships and international meets. In 1921, he finished second place at the Canadian championship, took third place at a later North American championship at Lake Placid, New York, and competed in other events, local and out of province. Outside of ice-sports, he enjoyed swimming and baseball, playing shortstop with the Winnipeg Granites baseball club of the old senior league, based at Wesley Park.

Having returned from Europe with his Olympic gold medal, he almost returned to competitive sports, on account of his prowess as a swimmer. He entered and won the one-mile race at Winnipeg Beach and was Western Canadian champion, but declined on account of not being able to finance his way to the Canadian finals in Montreal before the opportunity of returning to Europe to contest for another medal. He continued with the Falcons for the 1920-1921 season, declining immediate offers to play elsewhere.

After the 1920-1921 season, he considered offers from around North America, including from Lester Patrick and Sigurdur Franklin “Frank” Fredrickson to join them in Victoria, British Columbia but he opted for Duluth, Minnesota, playing in the United States Amateur Hockey League for a few years. He first took residence there during the Hockey season, and later relocated with his family to Duluth, where he owned and operated his own oil station, and resided there in the summer off-seasons to come.

During his time in Duluth, he also encountered and raced the 1924 Olympic American speed skating gold medalist Charley Jewtraw, besting him in friendly competition several times.

Goodman went professional in 1925, joining the Central Hockey League (later American Hockey Association / AHA) with the Duluth Hornets for the 1925-1926 season and received $2,500 in his first year.

He continued to play for Duluth into the 1930-1931 season when he transferred to the Kansas City Pla-Mors, reuniting with ex-Falcon Haldor “Slim” Halderson and where he played through the 1931-1932 season. He spent the 1932-1933 season as both player and coach of the Wichita Blue Jays; moving to the Kansas City Greyhounds (1933-1935) where he again held the player-coach dual role for two seasons, winning the Harry F. Sinclair Trophy as AHA Champions in 1934.

He spent the next three seasons (1935-1938) as player-coach with the Wichita Skyhawks, after which he resigned. For the 1938-1939 season, he moved to Coral Gables, Florida, helped established the Coral Gable Seminoles Hockey Club with the Tropical Hockey League, and continued as its player-coach. The league folded at the end of the season, after which he retired from competitive sports, though he did continue coaching in the Florida Hockey League (1952) was known to lace up or coach teams for charity and United Service Organization events. He also managed an ice skating rink (later known locally as the Polar Palace Coliseum), where he taught others the art of speed skating, including coaching his own son to both state and regional championships. He took employment as a deliveryman with Coral Gable Laundry (1947-1984) before retiring in 1984.

In an interview with Maurice Smith, as reported in the Winnipeg Free Press in 1969, he noted "I probably would have been a better Hockey player than I was, had I not been so fast. My speed hampered my stick handling. I'd overskate myself so to speak"

Bulk of this bio written by Nathan Kramer - Historian & Archivist at the Manitoba Historical Society.