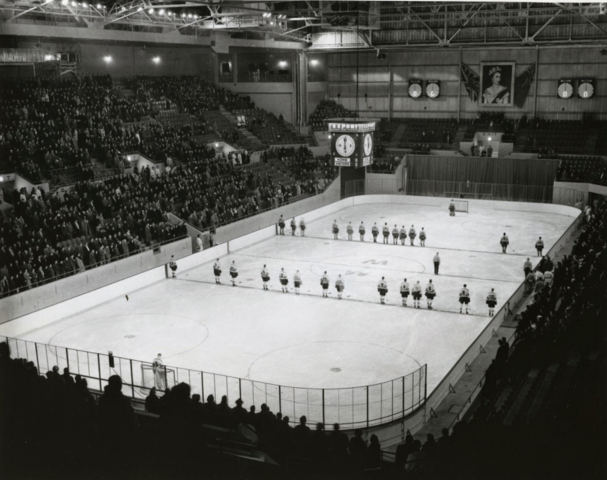 The ceremonial opening face-off was conducted by Warriors Hockey Club president J. D. Perrin, Sr. before a sell-out crowd (including standing room) of 9,671, a then-record for the league.

The Warriors called the arena home until 1961, when the club was sold and relocated. Six years later, the arena found a new tenant in the Winnipeg Jets junior hockey club when it began play in the new Western Hockey League. The club would later be renamed the Monarchs and played at the arena until 1977.

On September 6, 1972, the Winnipeg Arena found itself in the international spotlight when it hosted the third game of the infamous Summit Series between Canada and the Soviet Union. Approximately 9,800 spectators packed the arena to witness the two teams battle to a 4–4 draw. The 1974 Summit Series between the WHA and the Soviet Union also had game 3 played at the Winnipeg Arena.

In fall of 1972, a new era for the Winnipeg Arena dawned with the birth of the Winnipeg Jets, playing in the upstart World Hockey Association / WHA. Their on-ice success during the 1970s brought three Avco Cup WHA championship banners to the rafters of the arena and made the Jets the pride of the city.

In 1979, the Jets were one of four teams admitted into the National Hockey League / NHL after the demise of the WHA, which would necessitate a major expansion to the arena. The seating capacity was expanded to 15,565, mostly through the construction of upper decks on the east and west sides.

During the 1980s and '90s, the Winnipeg Arena was recognized as one of the loudest arenas in North America. Jets fans initiated a tradition known as the "White Out", when fans would dress in all-white during playoff games, creating an intimidating environment for opposing teams.

Financial troubles forced the Jets to leave Winnipeg in 1996. It was a big blow for the city, but the arena was not without a tenant for long, as the Manitoba Moose of the International Hockey League moved in the next season. Renovations once again took place, with the addition of club seats and a new club lounge in place of the North End ice level seats. The Moose would be the arena's last tenant.

The arena found itself back in the international spotlight when it hosted the 1999 IIHF World Junior Hockey Championships. The tournament was a major success, setting a new attendance record, with 170,000 fans taking in the games. With the support of the raucous home crowds reminiscent of the former Jets days, the host Canadian team advanced to the gold medal game, but lost to Russia in overtime.

The opening of the privately-owned MTS Centre in 2004 meant the end for the Winnipeg Arena. On November 4, 2004 a sold-out crowd took in the American Hockey League game between the Manitoba Moose and Utah Grizzlies, the last official event to be held at the 49-year-old arena. Several former Jets players, including Bobby Hull and Teemu Selanne, were present for a special ceremony as the banners hanging from the rafters were lowered before the game.

Most of the memorabilia from the arena including the seats and the beloved trough from the washroom were auctioned off to the public prior to the final demolition on March 26, 2006.