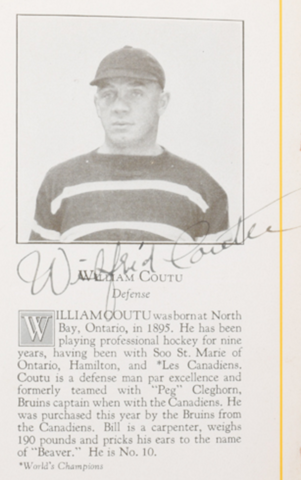 Coutu turned professional with the Montreal Canadiens in 1916–17, the last season of the NHA. He stayed with the Canadiens when the new NHL formed for 1917–18. During the Stanley Cup playoffs in 1919, Coutu and four other teammates contracted influenza and were hospitalized. The 1919 Stanley Cup series was cancelled.

After playing the 1920–21 NHL season with the Hamilton Tigers, Coutu was traded back to Montreal prior to the start of the 1921–22 NHL season, along with Sprague Cleghorn, in exchange for Harry Mummery, Amos Arbour, and Cully Wilson, in the NHL's first multiple-player trade.

Wearing No. 9, Coutu was named Canadiens captain in 1925-26, replacing Sprague Cleghorn. After the 1925–26 NHL season, Coutu was deemed expendable and traded to the Boston Bruins in exchange for defenceman Amby Moran who ultimately played just 12 games for the Canadiens.

During his first practice with the Bruins, Coutu body-slammed Eddie Shore. Coutu's forehead hit Shore's skull, severing Shore's ear. Shore visited several doctors who wanted to amputate the ear, but finally found one who sewed it back on. After refusing anaesthetic, Shore used a mirror to watch the doctor sew the ear back on. Shore claimed Coutu used his hockey stick to cut off the ear, and Coutu was fined $50; Shore later recanted and Coutu's money was refunded.

At the end of Game 4 of the 1927 Stanley Cup, Coutu started a bench-clearing brawl, apparently at the request of coach Art Ross, by assaulting referee Jerry Laflamme and tackling referee Billy Bell in the corridor. As a result, he was expelled from the NHL for life; the longest suspension to date. On October 8, 1929, the suspension was lifted so that Coutu could play in minor professional leagues. He never played in the NHL again, although he was reinstated in 1932–33 at the insistence of Leo Dandurand.