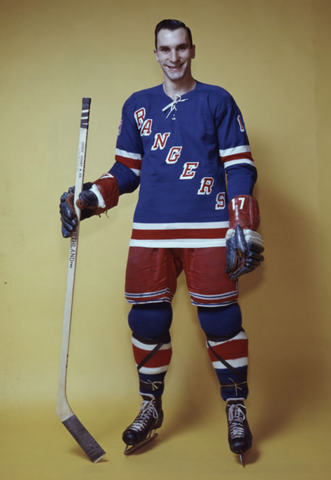 Prentice first got noticed for his Hockey abilities with the South Porcupine Teepees of a local juvenile league. The Teepees were affiliated with the Guelph Biltmore Mad Hatters of the OHA and that's where he ended up as a teenager.

With the Biltmores, Prentice stepped into an all-star lineup that included future NHLers Andy Bathgate, Ron Stewart, Lou Fontinato and Harry Howell. Together, they won the Memorial Cup in 1952, the only championship that Prentice would ever attain during his lengthy career in Hockey.

With such success at the junior level, the needy New York Rangers brought Prentice, Bathgate and Howell, among others, up to the Big Apple. There as a young recruit, Prentice struggled to find his confidence. The only real instruction given to the recruits was provided by goaltender Charlie Rayner who would spend extra time on the ice, offering advice on how to approach various goaltenders around the league.

Prentice eventually settled onto a line with Andy Bathgate and Larry Popein. The trio became the Rangers' most successful unit. Prentice became the two-way standout who excelled at backchecking, killing penalties, working the corners and jumping onto the powerplay. But his quiet, unassuming personality took a back seat to the more colourful Bathgate who was the dipsy-doodler and scorer among the trio. As such, Prentice has been characterized as the most underrated forward of his era.

In his eleventh season with the Rangers, he was traded to the Boston Bruins for Don McKenney in 1963. Prentice was not unhappy to join the Bruins, but he did feel a twinge of regret when, shortly thereafter, McKenney and Bathgate were traded to the Leafs -- a lineup he'd wanted to join.

In 1966, Prentice was traded to the Detroit Red Wings where he continued to skate with the league's elite, this time with Alex Delvecchio and Gordie Howe. He also picked up shifts with his old Ranger teammate Andy Bathgate who had also joined the Wings.

Two seasons later, however, Bathgate had moved on to the Pittsburgh Penguins. And in keeping with the program, Pens coach Red Kelly claimed Prentice in the Intra-League Draft to skate along side Bathgate. Prentice clicked in his new setting, leading the team in scoring. He lasted with the Pens until 1971 at which time he was sold to the Minnesota North Stars where he continued to score even at the age of 40.