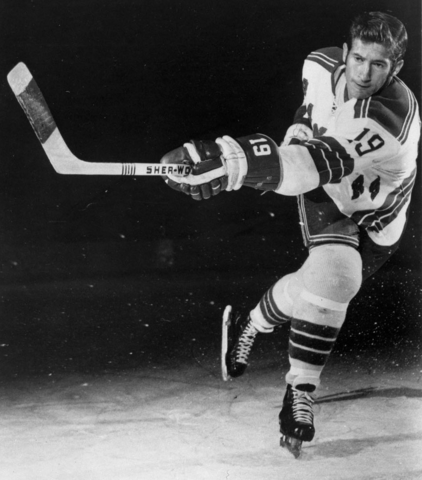 Ratelle starred with the Guelph Biltmore juniors, where he accumulated 137 points in two seasons. Toward the end of the 1959-60 season, he played his first three pro games with the Trois-Rivieres Lions of the Eastern Professional Hockey League and racked up eight points. The promising forward was sent back to Guelph for another year of junior. Ratelle was the top player on the renamed Royals and led the OHA with 61 assists.

Ratelle split the 1961-62 schedule between the Kitchener-Waterloo Beavers of the EPHL and the New York Rangers. He was forced to work on his game while spending much of the next two seasons with the American Hockey League's Baltimore Clippers.

In 1963-64, a serious back injury resulted in a spinal fusion operation and the subsequent rehabilitation was painful and time-consuming.

Ratelle gained a regular place in the New York lineup in 1964-65. The next year another back injury slowed his progress even though the team's fortunes were on the upswing. Initially Ratelle was placed on the third line but at the insistence of Rod Gilbert was reunited with his junior colleague with great success.

By 1967-68, he was a star in the league and recorded his first of eight 30-goal seasons. He gained much fame as the pivot on the famous G-A-G (Goal-A-Game) Line with Gilbert and Vic Hadfield in the early 1970s.

Ratelle was awarded the Bill Masterton Memorial Trophy in 1971. The 1971-72 season represented the high point of Ratelle's career. He established his personal high of 46 goals and 109 points and was the recipient of the Lady Byng Trophy and the Lester B. Pearson Award as the top player in the NHL as chosen by his peers.

Each member of the potent trio that season finished in the top five of the league's regular-season scoring list, though broken ankle suffered in March cost Ratelle a chance at the scoring title and limited his effectiveness in the playoffs. Even though the Rangers made it all the way to the finals, they might have fared better against Boston with a healthy Ratelle.

Ratelle was an important component of Team Canada when it defeated the USSR in the 1972 Summit Series. He scored four points in six matches while playing chiefly a defensive role, and his overall skill and calm temperament impressed the Soviet players and coaching staff.

In November 1975, Ratelle was traded with teammates Brad Park and Joe Zanussi in a blockbuster deal to the Boston Bruins for Phil Esposito and Carol Vadnais. Ratelle finished strongly that year for his second 100-point campaign. Ratelle thrived following the trade from Manhattan with 90 points in 67 games as a Bruin and his continuing excellence helped Boston reach consecutive Stanley Cup finals in 1977 and 1978.

In 1976 Ratelle was presented the Lady Byng Trophy for the second time.

He starred for several more seasons for Boston, gaining admiration for his slick passing, skill at faceoffs and all-around excellent play, retiring a Bruin after the 1981 season.

Ratelle played centre ice in the NHL for twenty-one seasons, accumulating 1267 points on 491 goals and 776 assists. At the time of his retirement, he was the league's sixth all-time leading scorer.

Ratelle served for several years thereafter as an assistant coach for the Bruins.

Jean Ratelle was elected to the Hockey Hall of Fame in 1985.