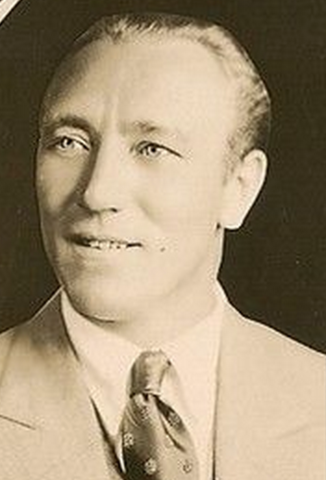 Emil Iverson - Born 1893 in Copenhagen, Denmark – Died February 21, 1960 was a Danish-American Ice Hockey player and coach, and a noted anthropologist.

The Minnesota Gopher Hockey Team won five Middle West championships while Emil was coach and four Big Ten Championships. During Iverson's seven-year stay the Gophers won 75, lost 21 and tied 10 games. Captain Frank Pond and goalie Fred Schade led Iverson's first team of 1923-1924 to a 13-1-0 season, while for the following season of 1924-1925 most of the home games were played at the newly constructed Minneapolis Arena. Captain Ed Olson led the 1925-1926 team to an undefeated season by winning 12 and tying 4 games. The 1928-1929 six shared top National honors with Yale as they compiled an 11-2-1 record. Chuck McCabe, Joel Brown, John H. Peterson, Leland Watson, and goalie Osborne Billings were selected to the All-Western team. In addition, McCabe, Brown and Peterson were accorded All-American honors during their Gopher careers. During this period Minnesota was consistently ranked among the very best in the nation.

During the same period his brother Kay Iverson coached a strong Marquette University team, and a strong rivalry was established between the two schools.

Iverson was head coach of the Chicago Black Hawks for part of one season in 1932, in which the Black Hawks would stumble to a 8-7-6 start, after which Iverson was fired.

Iverson was also President of the Chicago Amateur Hockey Association in 1933.

Emil Iverson was also responsible for discovering 50 Ojibwa First Nations skeletons and native artifacts in 1928. The site was one of the last undisturbed dwellings inhabited by the Kawawaigamak people of the First Nation Ojibwa people. He continued to conduct extensive research regarding the history of the Ojibwa people that seasonally migrated throughout Hunters Island and the Border Lakes. The thriving tribe of Kabwawiagamaks, located at Kawa Bay, were eventually decimated by the Spanish influenza epidemic and the forced removal by the Canadian Government. The people of the village were known by the White Settlers as the Kabwawiagamaks – because of their proximity to, and reliance on, what is now called The Wawaig river. After discovering the village Emil made sure the dead got the proper burial rites and brought back many artifacts to the Nett Lake people - their reservation being adjacent to his outfitting headquarters. This act of kindness was greatly revered by the Kawa Bay Band; to show their gratitude, Emil was given a ceremonial drum and the Annishinabe name "Chief of the Big Waters". The survey and graves proved once and for all, the size and scope of the Kabwawiagamak village was much larger than previously thought. His movie and photos of the expedition were shown to President Coolidge to help preserve the Quetico and Boundary Waters area. The complete story of his expedition and the history of Two Rivers - a leader of the Kabwawiaigamak Ojibwa, can be found in the novel "Hunters and Hearts"