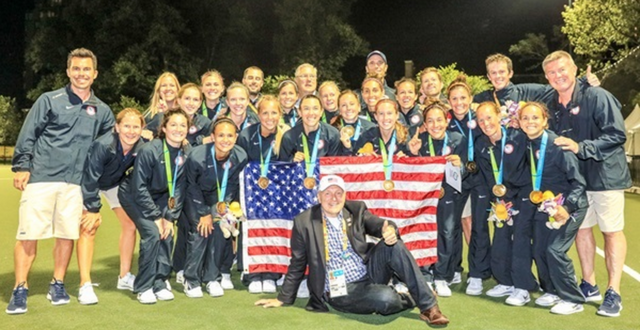 The match for the gold medal was disputed between Argentina and the United States. Both teams had yet to score. Argentina started the match with attacking getting two short corners in the third minute of the match. The shots were blocked by the US defense led by goalie Jackie Briggs. For the next five minutes, the teams battled for possession. 9 minutes, Alyssa Manley United States launched a shot but it was very high. A minute after pressure from US attack, led to the first penalty corner of the match, which resulted in a new short corner. The strong shot Lauren Crandall US was widespread remaining scoreless marker. Both teams continued to battle for possession. 14 minutes Reinprecht Katie looked good opportunities to shoot, but the Argentina defense continually regained possession. The two teams played a close game, and the score remained in Argentina 0- 0 United States, to end the first quarter.

The second quarter began with cheers for both Argentina and the United States. 19 minutes, Delfina Merino tried to score but Crandall made an incredible maneuver avoiding Merino shoot. Argentina continued pressure attack. Merino fired again but the defense of the United States refused, and Julia Reinprecht got the ball. United States then reached his circle of attack but could not shoot. Argentina won a penalty corner in the 25th minute, but the shot was saved by Briggs. At this point the crowd loudly encouraged by the United States. Both teams alternated running swiftly possession in midfield. In the final minutes of the second quarter, the United States worked hard in attack, but Argentina could fire prevented. 30 minutes, Murphy tried to score again from the left, but Stephanie Fee US recovered the ball, keeping the game scoreless.