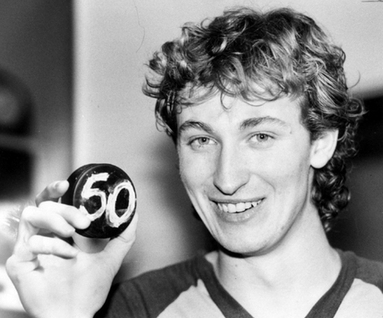 Wayne Gretzky started the game vs the Philadelphia Flyers with 45 goals.

Gretzky scored twice in the first period, then beat Pete Peeters once more in each of the second and third taking him to 49, before notching his 50th on a dramatic empty netter with just three seconds remaining to clinch an incredible 7-5 Oilers victory. His 50th was set up by Grant Fuhr and Glenn Anderson and scored past a diving Bill Barber.

Gretzky also set a modern record during that Flyers game of four, 4-goal games in one season; again a record he equalled two years later but nobody else has approached since the days of Joe Malone. Gretzky established yet a third separate mark by being the only player in the history of the game to notch consecutive games of 4+ goals, a feat even he accomplished just this once.

Gretzky scored an NHL record 10 hat tricks in that 92-goal season, a record that has been equalled only once, by Gretzky himself in his 87-goal season two years later. He had at least one assist in all ten of those games, in fact he scored at least five points in all ten