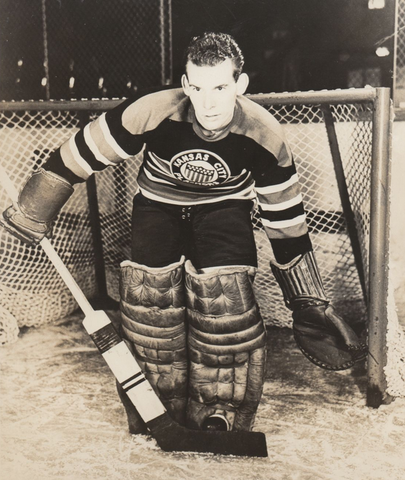 Goaltender Doug Jackson played a half dozen games for the Chicago Black Hawks in the late 1940s. He enjoyed a solid amateur and minor pro career that covered a decade but was unable to find his form during his brief NHL trial.
Born in Winnipeg, Manitoba, Jackson was a fairly tall goalie for his time standing 5'10". He played two years with the Winnipeg Rangers of the Manitoba Junior Hockey League and recorded a league-best 3.92 goals against average in 1942-43. His progression was halted by two years of military service during World War II.

Jackson made his pro debut after the war with the Kansas City Pla-Mors of the USHL. In his rookie season he recorded two shutouts and a 3.25 goals against mark in 52 games and was voted to the league's second all-star team. Over the next two seasons his workload increased to 54 then 59 games. Jackson backstopped K.C. to consecutive league championships in 1946 and 1947. After leading the league with four shutouts in 1947-48, he was called up to the Chicago Black Hawks.

Jackson posted a 2-3-1 record and a bloated 7.00 goals against mark in his brief NHL tenure. He then moved on to play four seasons in the PCHL and one year with the senior Nanaimo Clippers before retiring in 1952.