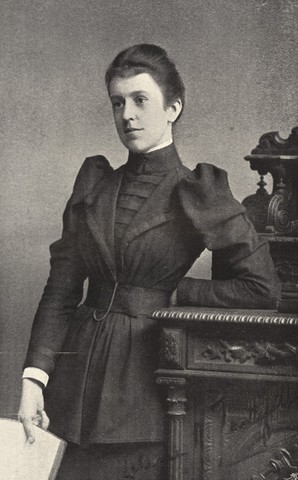 Faithful was the second youngest of the six girls and two boys. She lived in an upper-middle class country house in Hertfordshire and was educated at The Grange in Hoddesdon (the only girl at the time), and later at home by her mother and governesses. Emily Faithfull, an early women's rights activist, was her cousin. Both of Faithfull's parents were opinionated about issues such as femininity and social class, but were not radicals.

Faithfull entered Somerville College of Oxford University in 1883, just four years after it was established. She was the first captain of the women's Hockey team and the college tennis champion, and graduated with a first in English in 1887. She later claimed an ad eundem degree from Trinity College, Dublin in 1905.

Between 1887 and 1888, Faithfull taught at Oxford High School, and was secretary to the principal of Somerville, Madeleine Shaw Lefevre. From 1889 until 1894 she was a lecturer at Royal Holloway College and then joined King's College London, where she succeeded Cornelia Schmitz as vice-principal of the Ladies Department for the next 13 years It was here that Virginia Woolf met her, and Faithfull described her position as "one of the happiest educational posts for women in England".

In 1890, Faithfull suggested that women who had competed for Oxford or Cambridge in intercollegiate sports should be awarded special badges like their male counterparts. This was implemented in 1891 and marked the start of the Lady Blue. Along with Margaret Gilliland and Sara Burstall, Faithfull believed that the important household topics of cookery, laundry and hygiene should feature as scientific subjects on the school curriculum. She wanted to get rid of the distinction between the professional woman and the women studying "home science".

In 1907, Faithfull became the principal of Cheltenham Ladies' College, succeeding Dorothea Beale. She remained in that position for 15 years. In 1920, she became Justice of the Peace for Cheltenham, becoming one of the first women magistrates in England. Faithfull was active as a social worker, improving social conditions for the poor in London, and was chair of a committee to improve nutrition in children. She founded the Old People's Housing Society in Cheltenham, later renamed the Lilian Faithfull Homes. Faithfull was the model for the Helen Butterfield character in The Constant Nymph, a 1924 novel by Margaret Kennedy (a former student of Cheltenham). She was a Fellow of King's College London and received a honorary MA from Oxford in 1925. I

n 1926 Faithfull was made a Commander of the British Empire.