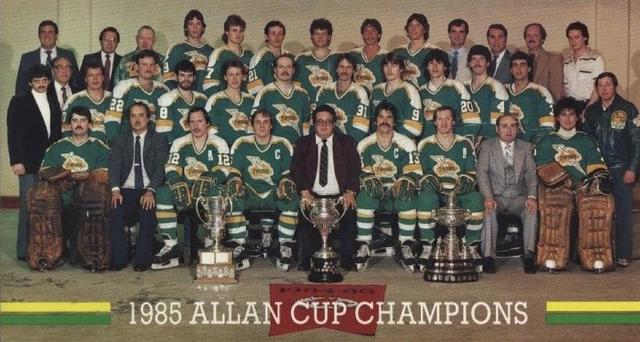 The Thunder Bay Twins repeated as Manitoba and Western champions and found themselves in a best-of-seven marathon with the Corner Brook Royals in Corner Brook, Newfoundland. So far from home, the Twins may have accomplished one of the greatest feats in amateur Hockey history.

The Corner Brook Royals crushed the jet-lagged Twins 9–5 in game one. Game two went a little better for the Twins, as they forced overtime but were overpowered by the Royals 3–2. Game three needed to be won by the Twins, but again they were embarrassed by the Eastern champions 9–5. With their back against the wall down 3-games-to-none, the Twins began their trek back. Game four ended with a 4–2 nail-biter of a win for the Twins. Game five saw the Twins embarrass a seemingly deflated Royals squad 8–3. The Twins took game six 2–0 and then finished the comeback with an unbearably close 5–4 victory.

With their third Allan Cup victory, the Twins became the only team in Allan Cup history to come back from a 3–0 deficit to win the Allan Cup.

As the tournament is now in a round robin format and a revert to best-of-sevens are very unlikely, the feat may never be repeated.