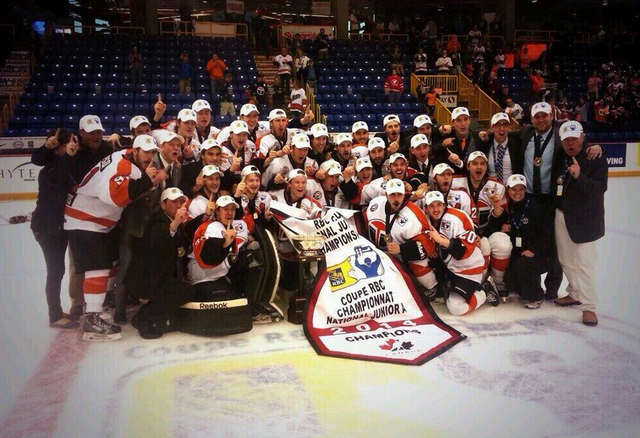 Derek Falloon scored the biggest goal in Yorkton Terriers history at 15:01 of overtime, giving the Terriers a 4-3 win over the Carleton Place Canadians on Sunday afternoon and the first RBC Cup championship in franchise history.

It was Falloon’s second overtime goal in four days; he scored the extra-time winner to give Yorkton a 2-1 win over the Dauphin Kings on Thursday, a goal that clinched a semifinal spot for the West Region champions.

Falloon jammed a loose puck through the pads of Carleton Place goaltender Guillaume Therien and just inches across the goal line, giving the Terriers an unlikely national championship.

Not only did Yorkton have to win four do-or-die games in five days, they trailed 3-1 with less than three minutes to go Sunday before one of the greatest comebacks in RBC Cup history.

Daylan Gatzke had the other goal for the Terriers.

Anthony McVeigh, Stephen Baylis and Andy Sturtz scored for Carleton Place, which came up just one goal short of winning its first national championship in its first RBC Cup appearance.

McVeigh got the scoring started for the Canadians midway through the first period, rifling a shot over the glove of Yorkton goaltender Kale Thomson from in close.

But Gatzke answered six minutes later for Yorkton, tipping a Chase Norrish shot halfway to the net and sending the puck bouncing by Therien to make it 1-1 after 20 minutes.

Despite being outshot 12-9 in the second period, the Canadians scored both goals in the middle frame; Baylis went short-side over the glove of Thomson to restore the Carleton Place lead at 4:12, and Sturtz made it a two-goal game with a superb individual effort at 10:34, outmuscling the Yorkton defence before beating Thomson on the backhand.

The Terriers came out firing in the third period, recording 17 of their 36 regulation-time shots in the final 20 minutes.

Lishchynsky cut the Canadians’ lead to one with 2:48 to go, snapping a shot over the shoulder of Therien, and Johnson tied the game right off the ensuing face-off, poking a loose puck past the Carleton Place netminder.

Yorkton had the better chances in overtime, outshooting the Canadians 10-4 in the extra period, leading to Falloon’s winner and making the Terriers the first SJHL team since Humboldt in 2008 to win the RBC Cup.