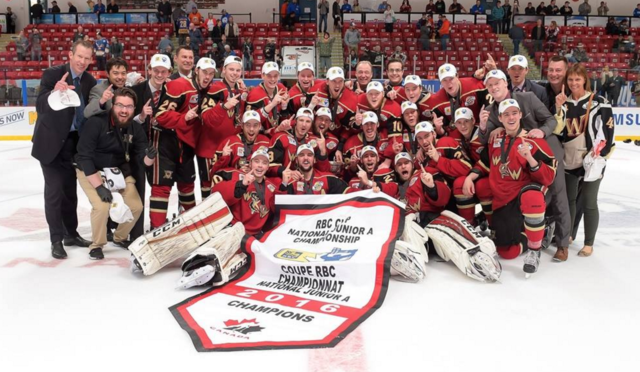 Matthew Greenfield made 48 stops in the West Kelowna net. Jonathan Desbiens, Reed Gunville, Liam Blackburn and Rylan Yaremko scored for the Warriors, in a 4 to 0 win.

Prior to the national event, they earned their way to a Fred Page Cup victory after completing the British Columbia Hockey League regular season with a 38-17-2-1 record.

“In the playoffs we seemed to be a little bit of an under dog for what ever reason but we had to come through some really good teams to get here,” Ferster said. We didn’t have an easy road, we had to work really hard and battle through four great teams,” he added, as they faced Salmon Arm Silverbacks, Penticton Vees, Chilliwack Chiefs, and Nanaimo Clippers before winning entering the Western Canada Cup.

West Kelowna’s leading goal scorer, five goals for six points, Jonathan Desbiens opened the scoring 5:21 in the first period, a goal that would be the championship winner.

Greenfield, West Kelowna’s starting net minder, concluded the tournament with an overall 3-0 record, which included two preliminary wins against the Carleton Place Canadians and the Brooks Bandits. He allowed two goals on 54 shots in the preliminary. Backup Keelan Williams allowed 10 goals on 116 shots, for an overall 2-1 tournament record.