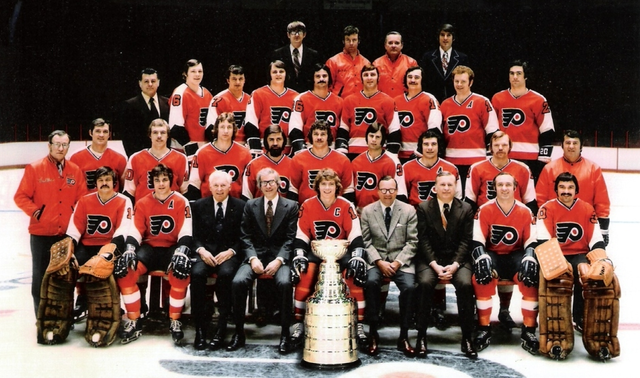 The Flyers won the best-of-seven series four games to two and became the first team from the 1967 Expansion to win the Stanley Cup. Boston won the first game of the finals at home 3-2. The Flyers nearly scored late in the game to break a 2-2 tie. Bobby Orr, having saved the goal by blocking the open Boston net with his leg, took the puck up ice and scored on a slapshot past Bernie Parent with a little over a minute remaining in regulation. Game 2 saw the Bruins on the verge of a 2-0 series lead when Flyer's defenseman Andre Dupont scored with Parent pulled with less than a minute remaining for an extra attacker to tie the score at 2-2 and Bobby Clarke scored the 3-2 game winner in overtime. The Flyers, led by Parent's play in goal, won the next two games on home ice to take a 3-1 series lead. Game 5 in Boston was a sloppy affair marred by many fights and penalties as Boston easily won extending the series to a game 6 in Philadelphia. Before a national audience watching the game on NBC and a raucous Philadelphia crowd, Parent threw an epic 30 save shutout at the Bruins as the Flyers won the game 1-0 and the series and Stanley Cup.

Bernie Parent was named the winner of the Conn Smythe Trophy as playoff MVP.

The Flyers were the first of the non-original 6 teams in the NHL to win the championship.