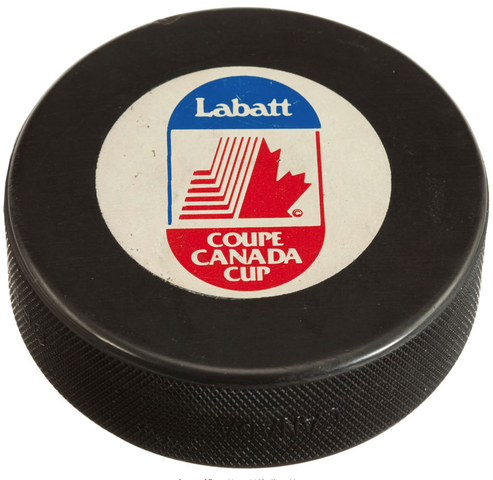 Widely considered one of Hockey's best exhibitions in history, the star-studded Canadian team defeated the Soviet Union by winning two out of three games in thrilling fashion during the 1987 Canada Cup finals.

Here is the puck that was used when Mario Lemieux netted the game-winning goal in the second overtime of Game 2 of the Final series.

A truly historic moment, "Super Mario" was on the receiving end of another miraculous Wayne Gretzky assist, which propelled their team to a 6-5 victory, and an eventual championship win over the Soviets. Puck shows light use, while displaying the proper "Labatt Coupe Canada Cup" screened on design.

Another terrific memento from the collection of former player and referee Paul Stewart.