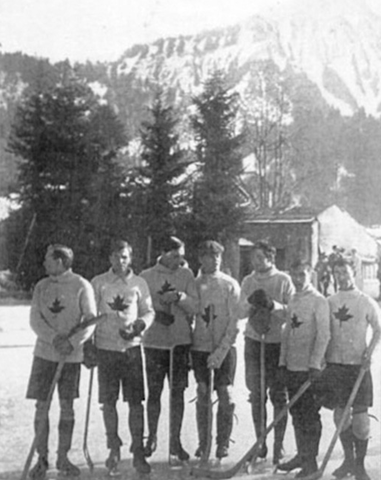 On 10 January 1910, wearing the red maple leaf on their uniforms, the first Hockey club representing Canada to do so, these Oxford Canadians were undefeated and won the first European Championship in Les Avants, Switzerland (defeating England by default) and then, a few weeks later, the English Championship.
This team was the first Team Canada.

On Jan 10, 11, 12 a big tournament for the Championship of Europe was to take place in Les Avants, a winter resort above the Lake of Geneva … the President of the Swiss League sent us an invitation to take part, which we accepted … In the tournament, Belgium, Germany, Switzerland, England and Canada participated and we easily came out on top.

“We resolved to call ourselves the Oxford Canadian Team. There were a number of young English ladies at our hotel and they very kindly helped us to make up our costumes, which consisted of blue ‘shorts’ and a white sweater with a maple leaf on the breast . I remember the main difficulty was to get a good design of a maple leaf as there was not even a picture of one in the village …