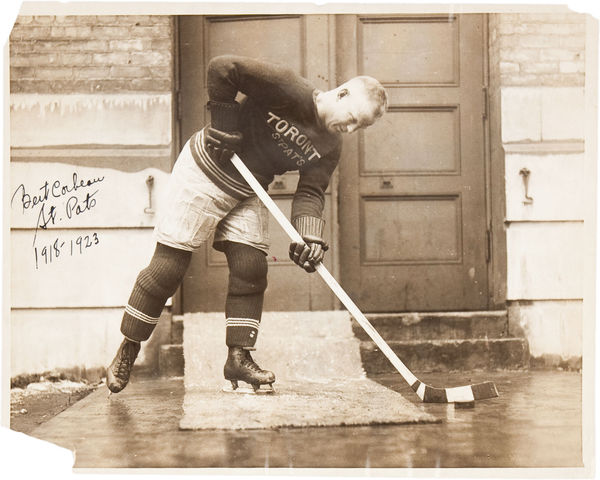 Corbeau played junior Hockey for the Penetang Hockey Club from 1910 until 1912, when he moved up to the Penetang intermediate team.

Corbeau turned professional with the Halifax Crescents in 1913, playing one season before signing with the Montreal Canadiens in 1914. In Montreal, Corbeau became a reliable and tough defenceman that could also score.

In his second season in Montreal, Corbeau helped the Canadiens win the 1916 O'Brien Trophy as National Hockey Association / NHA champions, and then win the 1916 Stanley Cup championship, the first final that needed all 5 games to determine the winner.

Corbeau and the Canadiens would win the 1917 O'Brien Trophy as NHA champions, but lose in the Stanley Cup finals to the Seattle Metropolitans.

Corbeau's rights were retained by Montreal after NHA folded, November 26, 1917, and would be a member of the NHL Canadiens until 1922. Corbeau and the Canadiens reached the 1919 Stanley Cup finals, but the series was cancelled after 5 games were played, as some Canadiens players got infected with a outbreak of influenza.

Corbeau was traded to the Hamilton Tigers for cash October 1, 1922, playing the remainder of the 1922-23 season in Hamilton.

Corbeau was traded to the Toronto St. Pats with Amos Arbour and George Carey for Ken Randall, the NHL rights to Corb Denneny and cash, December 14, 1923

Corbeau stayed with the Toronto franchise and was one of the original Toronto Maple Leafs before being waived in October 1927.

He then played two seasons in the minor Canadian Professional Hockey League with Toronto Ravinia (1927-28) and then just 9 games with the London Panthers before retiring as a player.

From 1928 to 1929, Corceau coached the Panthers and then for a decade was an NHL referee.

Corbeau then returned to coaching with the Atlantic City Sea Gulls of the Eastern Hockey League from 1939 to 1942.

Corbeau was the first player to play for both the Montreal Canadiens and the Toronto Maple Leafs.

In the 1926–27 season, he became the first NHL player to record 100 minutes or more in penalties in one season.

Bert Corbeau was posthumously Inducted into the Penetanguishene Sports Hall of Fame in 1987.

A collectible Hockey card featuring Bert Corbeau, the 1923 Paterson Hockey card (catalogued as V145-1) is one of the rarest cards in existence. Only a handful were made by a company that featured them in a contest. Contestants who collected a complete set of 40 cards were awarded a pair of skates. The Corbeau card was "short printed" in order to limit the number of winners.

Bert Corbeau is not in the Hockey Hall of Fame.