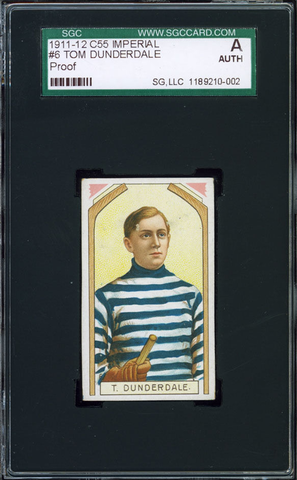 Graded "Authentic" by SGC. Never before have proof cards been seen from the early days of hockey. This card of Tom Dunderdale is one of only 17 total C55 Proofs known to exist and it documents some of the last changes made by the lithography company before the set was authorized to be commercially printed by Imperial Tobacco.

This one-of-a-kind C55 Proof possesses greater detail and clarity, particularly on Dunderdale's face, jersey, and glove. The outer portions and borders of the card have similar defining characteristics as does the background. The reverse side of the card is missing the line, “Born at Ottawa, Ont.” and there is a period after Dunderdale’s name on front. The last "E" in Dunderdale on the back of the card is narrower and is followed by a dash instead of a period. The rest of the text is both narrower and sharper.

Like on the Proof card of Joe Malone, there is a staple hole near the Dunderdale’s head on the obverse side. There are multi-colored registration marks near all four corners.