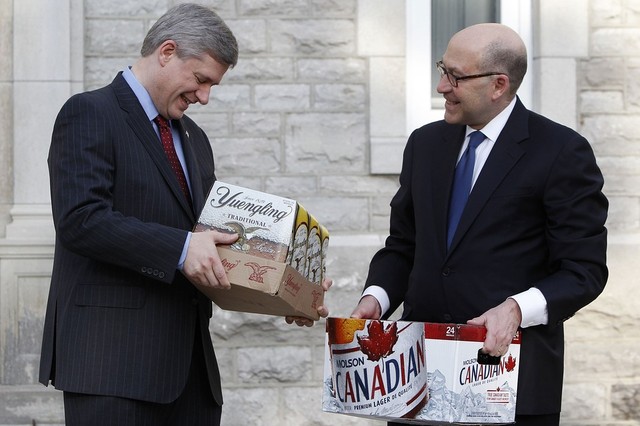 Prime Minister Stephen Harper has cashed in on his bet with USA President Barack Obama over the Olympic men’s gold-medal Hockey game.

Harper and Obama had each wagered a box of beer on the outcome of the Canada-U.S. men’s Olympic final, won by Canada 3-2 in dramatic fashion on Sidney Crosby’s overtime goal.

Obama, through Jacobson, added an extra case of Yuengling, the president’s American brew of choice had he won the friendly wager.

“To show there’s no hard feelings, the president also threw in a case of Yuengling on top of the Molsons,” Jacobson told the prime minister, adding he also wanted to “congratulate the Canadian people on the Games.”

“They were great, the athletes were great and the spirit and hospitality were great to my people and around the world . . . .”

Harper responded in kind, lauding the American athletes and visitors to the Games — and thanking them for making good on their wager.

“David, you guys always fulfil your promises to us and we appreciate it.”