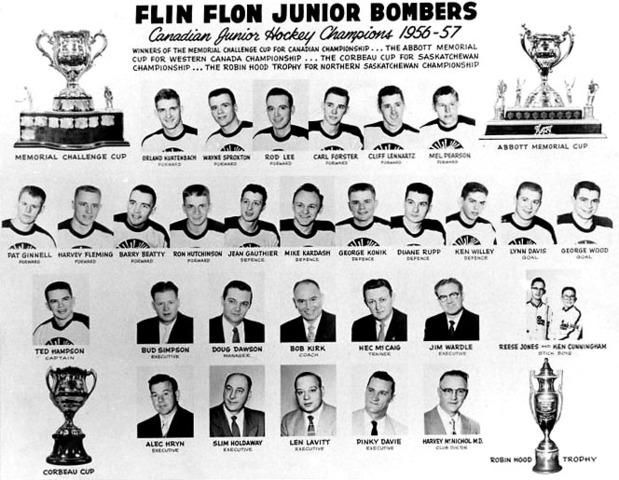 The 1956–57 Flin Flon Bombers breezed thru the SJHL, averaging nearly 6 goals a game, while allowing only 2 against, winning the league title by 19 points. In the playoffs, they beat Humboldt Indians four straight and won the final in six games over the Prince Albert Mintos.

Next came the Edmonton Oil Kings of the WJHL. After splitting the first four games, Flin Flon beat the Oil Kings two straight to clinch the series 4–2. The Bombers became the first team from the SJHL to reach the Western junior final. They quickly showed that they belonged by sweeping the Fort William Canadiens four games straight to capture the Abbott Cup.

As allowed by CAHA regulations, the Bombers picked up back-up goalie Lynn Davis and defenceman Jean Gauthier from the Lakehead and centre Orland Kurtenbach from Prince Albert for the Memorial Cup.

Coming west for the Canadian Championship was a powerhouse assembled by the Montreal Canadiens. Coached by Sam Pollock and assistant Scotty Bowman, the Ottawa Junior Canadiens won the eastern final in five games. The first three games were in Flin Flon with the balance in Regina, where Montreal sponsored the junior Pats. Game one was delayed for two days, but the Bombers were ready for the heavily favoured easterners and went on to a 3–1 victory. The Canadiens won the next two games 4–3 and 5–2. In Regina, the Bombers won 3–1 and 3–2, but the easterners fought back to tie the series with a 4–2 victory in game six. On May 8, the Flin Flon Bombers brought the Memorial Cup west, for the first time since 1948, with a 3–2 victory.