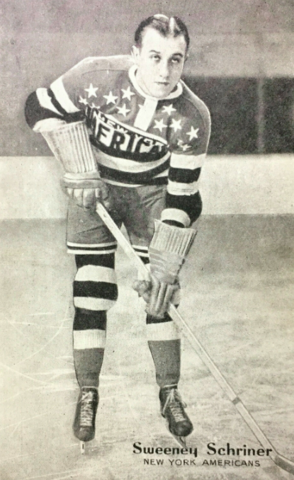 Schriner learned the game of Hockey on Calgary's outdoor rinks and played his minor Hockey in the city. Schriner was a member of the Calgary Canadians junior team that appeared in the Memorial Cup playdowns in both 1930 and 1931, before he turned to senior Hockey with the Calgary Bronks, playing in the 1932 and 1933 Allan Cup tournament. He was a top scorer in the Alberta Senior Hockey League; his 19 goals and 22 points in 1931–32 and 22 goals and 26 points in 1932–33 were all league-leading totals.

The New York Americans invited Schriner to their training camp in 1933. They were impressed with his skating ability and signed him to a contract to play for their International Hockey League (IHL) affiliate, the Syracuse Stars. He appeared in 44 games with the Stars in 1933–34 where he totaled 18 goals and 11 assists. The Americans promoted him to their lineup to start the 1934–35 NHL season, and in doing so, made Schriner one of the first Russian-born players in NHL history. He quickly emerged as an offensive star; he was third in scoring among players in the Canadian Division at the midway point of the season. The NHL named him rookie of the year after he finished the year with 18 goals and 40 points.

Schriner continued to display his scoring ability in his second season. He scored four goals in a 5–5 tie with the Toronto Maple Leafs in the Americans' second game of the 1935–36 season, en route to a 45 point season that led the league in scoring. Additionally, the Canadian Press voted him to the First All-Star Team for the season. He again led the league in scoring in 1936–37, with 46 points, and was named to the Second All-Star Team.

After five seasons in New York, the Americans dealt Schriner to the Maple Leafs in May 1939 in exchange for five players: Jimmy Fowler, Busher Jackson, Murray Armstrong, Doc Romnes and Buzz Boll. The five-for-one trade was unprecedented in the NHL at that time. Schriner remained an effective scorer in Toronto, where he earned his second First All-Star Team selection of his career in 1940–41. One year later, he was instrumental in the Maple Leafs' comeback in the 1942 Stanley Cup Finals. He scored the tying and winning goals in Toronto's 3–1 victory in the seventh game against the Detroit Red Wings to win the Stanley Cup, a moment described as being one of his greatest thrills in Hockey. It was Toronto's first championship in ten years, and the Maple Leafs became the first team in NHL history to overcome a 3–0 series deficit to win a best-of-seven playoff series with their victory over Detroit.

Schriner returned to the NHL and the Maple Leafs for the 1944–45 season, helping the Maple Leafs win the 1945 Stanley Cup championship. Schriner had 3 goals, 1 assist in 13 playoff games, including the game winner in the first game of the Stanley Cup finals. Schriner played two more years in Toronto before announcing his retirement for the third time in 1946.

Following the season, Schriner ended his playing career for the fourth and final time. He coached a season of senior Hockey in Nova Scotia, after which he returmed to Alberta where he briefly coached the Crow's Nest Pass Coalers in the Western Canada Junior Hockey League in 1951.