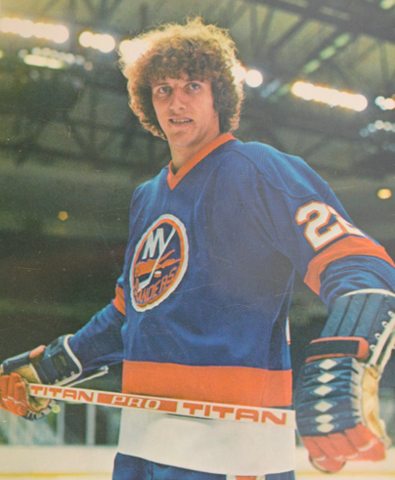 Bossy started his junior career with the Laval Nationals of the Quebec Major Junior Hockey League at the age of 14. Bossy would play 4 full seasons with Laval, scoring 70, 84, 79 and 75 goals in succession.

The New York Islanders made him their first choice, 15th overall in the 1977 NHL amateur draft. General manager Bill Torrey was torn at first between taking Bossy and Dwight Foster. Bossy was known as a scorer who could not check, while Foster could check but was inferior offensively. Coach Al Arbour persuaded Torrey to pick Bossy, figuring it was easier to teach a scorer how to check.

When Bossy looked at his 1st contract he said to Bill Torrey that's not a lot of money for someone who is going to score you 50 goals a season. Torrey told Bossy he would happy if he scored 20 to 30 goals a season.

Bossy turned up at training camp with a desire to show what he could do. Coach Al Arbour placed him on the same line as two other up-and-coming stars -- Bryan Trottier and Clark Gillies. In their first exhibition game, the Islanders mounted a good attack. Bossy and Trottier raced the length of the ice, outmaneuvering their opponents and flipping passes back and forth. Bossy didn't score, but Arbour said after the game, "We picked the guy we needed!" Bossy, Trottier and Gillies would become know as the "The Trio Grande"

Bossy boldly predicted that he would score 50 goals in his rookie season. He made good on his promise, scoring a then-record 53 goals as a rookie in the 1977–78 season, and won the Calder Memorial Trophy for NHL rookie of the year, and was named a Second Team All-Star.

Then, in the 1980–81 season, Bossy became only the second NHL player to score 50 goals in 50 games. Turned out Bossy had made a plan to tie or beat the mark set by Rocket Richard in the 1944-45 season. Only a very few of his closest friends, including Trottier, knew about Bossy's plan. They liked the idea.

At first, everything went according to plan, even a little better as Bossy reached the mark of 25 goals in 23 games. The whole league began talking about Bossy. Players were assigned to personally guard Bossy. But the media hadn't caught on yet. It was only after 36 games in the regular season, when Bossy had six hat tricks to his credit, that one journalist inquired whether the Islanders forward had his sights set on Phil Esposito's record -- 76 goals in 78 games. That was when Bossy admitted which record he was after. The news caused an uproar.

This was hyped by the Hockey press as he was in an unofficial competition with Charlie Simmer of the Los Angeles Kings to see who could first accomplish the 50 in 50 milestone since Richard.

On January 24, 1981, both players were involved in their 50th game of the season, with Simmer at 46 goals and Bossy at 48. Simmer's 50th game was played several hours earlier than the one on Long Island with Bossy. Simmer got a hat trick and was just one goal shy of the mark. It was up to Bossy.

Making it particularly dramatic, Bossy was scoreless for much of the game vs the Quebec Nordiques, but nearing the final five-minute mark, he picked up his forty-ninth tally. Then, with just 89 seconds remaining, Bossy got a pass from Brian Trottier and from the left faceoff circle, wired his 50th goal past Ron Grahame. He began jumping up and down on the ice and the fans went wild, throwing objects onto the ice. In defiance of NHL rules, the Islanders also spilled onto the ice. A telegram of congratulations from Maurice Richard was waiting for Bossy in the dressing room.

Bossy finished the 1980-81 season with 68 goals, 51 assists in 79 games, leading the league in goals, and in the 1981 playoffs, scoring 17 goals, 18 assists, as the Islanders went on to capture their second of four consecutive Stanley Cups.

Bossy was selected to represent Canada at the 1981 Canada Cup, and led the tournament with 8 goals, but Canada lost the 1 game championship final to the Soviet Union.

Bossy was known for being able to score goals in remarkable fashion, the most incredible, perhaps, in the 1982 Stanley Cup Finals against the Vancouver Canucks when, up-ended by a check from Lars Lindgren and flying a couple of feet in the air, parallel to the ice, Bossy nonetheless managed to hook the puck with his stick and score on a backhand shot for his 15th goal of the playoffs. Bossy would be awarded the 1982 Conn Smythe Trophy as NHL playoff MVP. Bossy also set a scoring record for right-wingers with 147 points during the 1981-82 season.

Bossy is also the only player to record four game-winning goals in one series (1983 Conference Final). Bossy scored 17 goals, 9 assists during the playoffs, leading the Islanders to their final Stanley Cup championship in 1983.

The Islanders made a fifth straight Stanley Cup final in 1984 but they were outmatched by the Edmonton Oilers who defeated them 4–1. Bossy, who had scored 8 goals after the first three rounds of the playoffs (and 17 goals in the past three consecutive post-seasons, in which he is the only player to score 17 goals in three consecutive playoff years.), was silenced completely in the finals series.

Bossy again represented Canada, this time in the 1984 Canada Cup, scoring 5 goals, 4 assists in the tournament. Bossy scored one of the biggest goals of his career in the semi-final vs the Soviet Union, tipping in a shot from Paul Coffey in overtime. Bossy later quoted: "I didn't deliberately re-direct the puck," "I saw Coffey's shot coming so I placed my stick stomach-high. I just got my stick in the way where I thought the shot would be." He added, "It's one of the greatest and most exciting games I've ever played in, and not because I scored the winning goal in overtime."

Bossy played 3 more seasons with the Islanders before he started to have serious back problems. Bossy hoped to go to training camp in the fall of 1987, but no medical therapy had changed his condition. He then took the 1987-88 season off to try different treatments for his back. Nothing worked, and no one could figure out what exactly was wrong. Though only thirty-one years old, Bossy was forced to officially retire in October 1988.

At the end of his shortened playing career, Bossy had impressive numbers. He scored 573 goals and 553 assists in only 752 games. In 129 playoff games, he had eighty-five goals and seventy-five assists. When he retired, he held the record for most goals per season average with 57.3. While he wanted to be considered a great overall player, he was basically known for his impressive scoring output. Even he did not completely understand how he did it. As he was quoted as saying by Stan Fischler in The All-New Hockey's 100, "About 90 percent of the time I don't aim: I just try to get my shot away as quick as possible as a surprise element. I just try to get the puck on net."

Bossy was a pure goal scorer, and he played on one of the greatest NHL teams of all time, a Dynasty Team that won 4 consecutive Stanley Cups, and appeared in 5 straight championship finals.

Bossy was also noted for his clean play, never resorting to fighting (and being one of the first players to speak out against violence on the ice), and winning the Lady Byng Trophy for gentlemanly play three times: 1983, 1984, and 1986.

Bossy holds the NHL record for scoring the most 50-or-more goal seasons with nine, and has the highest goals-per-game average, career (minimum 200 total goals) with .762 goals per game.

Bossy aspired to be the best player of his era but fell short, as the Hart and Art Ross Trophies were two of the awards that eluded Bossy during his career, going to Guy Lafleur, Brian Trottier, and Wayne Gretzky.

Here is a selected list of other official NHL record categories where Bossy was once the record-holder and/or is ranked very highly:

Bossy returned to Quebec with his family after he retired, and stayed in the Hockey business along with other employment. He represented Titan Hockey Sticks and Karhu Hockey Sticks, also becoming a broadcaster for Quebec Nordiques games. He also served as the ambassador for Chevrolet Safe & Fun Hockey.

Since 1981, the Michael Bossy Trophy has been awarded in the Quebec Major Junior Hockey League to the best professional prospect.

Mike Bossy was inducted into the Hockey Hall of Fame in 1991.

In 2005, Bossy made a cameo appearance on the fourth sequel to the French Canadian classic movie Les Boys, playing himself.

Mike Bossy was inducted into Canada's Sports Hall of Fame in 2007.

In January, 2017, Bossy was part of the second group of players to be named one of the '100 Greatest NHL Players' in history.