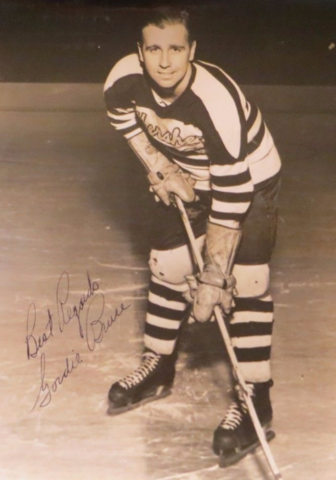 Bruce was a member of the Sudbury Wolves, and he helped Team Canada win the 1938 World Ice Hockey Championships in Prague, Czechoslovakia by scoring 3 goals and 2 assist in 7 games.

Bruce then played for the North Bay Trappers in the 1938-39 season.

Bruce joined the Hershey Bears of the IAHL to start the 1939-40 season. The club was looking for some additional scoring punch, and felt Bruce may be the answer. He dressed for 50 games that year and produced ten goals and 30 points. The following year the Bears played in the American Hockey League and Bruce improved on his offensive statistics to the delight of team management. In 46 games, he potted 23 goals and 42 points. He had been playing so well that he received the call to play for the Boston Bruins in eight games that season. Although he did not find the back of the net, he did manage an assist on one goal, and played in 2 playoff games, where the Bruins would win the 1941 Stanley Cup championship. Bruce qualified to be engraved on the Stanley Cup, but for some reason Boston Bruins choose to leave his name off.

In 1941-42, Bruce again played the majority of his games in Hershey, but Boston did insert him into their lineup for 15 starts. He responded with four goals and 12 points.

Bruce, like so many other athletes of that time, missed the next three years of pro Hockey serving in the war. Upon returning for the 1945-46 season he dressed in five games for the Bruins. The final four years of his pro career was spent exclusively in the AHL with Hershey.

Bruce retired after playing / coaching his final season with the Glace Bay Miners in 1950-51.