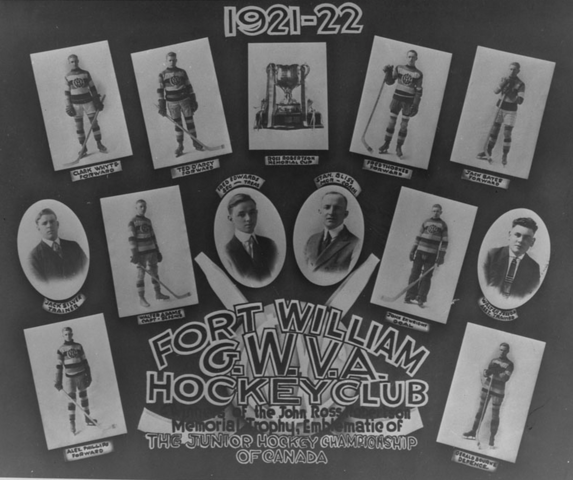 Fort William Great War Vets; a group of eight players who shocked the junior Hockey world with their unprecedented win. That year the Vets first faced off against Kenora in the district final, winning the series in overtime. Given the time period and the cost of travel, the CAHA decided that instead of the Vets travelling to Regina for the western final, the eastern champions, Toronto Aura Lee, would stop in Fort William en route to the finals in Winnipeg. It was here that the biggest upset in Memorial Cup history took place, with the vets beating the Aura Lee 5-3 in a sudden death playoff.

The Memorial Cup series opened on March 20 with Fort William posting a 5-4 victory. Fort William led 3-1 after the first period but trailed 4-3 going into the third after Acaster struck for three consecutive goals to end the second.
But Clark Whyte, a speedy winger, provided Fort William with the victory by scoring the tying and winning goals, his second and third of the game. Walter Adams and Fred Thornes also scored for the winners, while Naismith had Regina's other goal.
Regina actually thought it had scored a tying goal late in the third period. The goal umpire ruled the puck had entered the Fort William goal; however, the referee overruled him. In hindsight, that would turn into a huge ruling.
Two nights later, the War Veterans played the Patricias to a 3-3 draw. That was enough to give Fort William an 8-7 series victory.
The Leader reported: "It was one of the most heartbreaking finishes ever seen in a cup final. The Thunder Bay champions had a difficult time holding the Westerners to an even break for two-thirds of the way ... Though the Fort Williams were returned the victors they were not the better team tonight. They did not look nearly so good as in the first combat.'' Whyte, again, proved Regina's undoing as he scored all three of his club's goals. Acaster scored twice for Regina, with Naismith getting the other.
In the end it was a second-period goal by Whyte that stood up as the Memorial Cup-winning score. It gave Fort William a 3-2 lead in the game (8-6 in the series) but turned into the winner a few minutes later when Naismith scored to tie the game 3-3.

Funny Thing about this photo is that they call the Memorial Cup, the J. Ross Robertson Trophy (both are Beautiful Trophies)