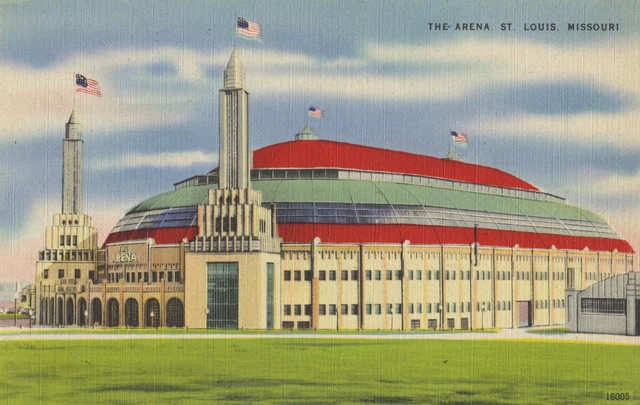 The Arena stood from 1929 to 1999. It was home to the St. Louis Flyers, St. Louis Eagles, Chicago Black Hawks, St. Louis Braves, St. Louis Blues and various other sports franchises. The Arena was located directly across I-64 from Forest Park's Aviation Field.

The huge structure was completed in 1929, just over a year after construction began. At 476 feet long and 276 feet wide, it was behind only Madison Square Garden as the largest indoor entertainment space in the country. A 13-story building could have been erected inside of it.

The Arena was not well-maintained after the 1940s, and its roof was damaged by a February 1959 tornado. After repairs, it was re-opened as the home of the Central Hockey League's St. Louis Braves, a Chicago Black Hawks farm team. The renovations included the removal of the fencing that enforced segregation, dating back to the time of the St. Louis Eagles.

By the time the NHL's St. Louis Blues began playing at the Arena in 1967, it had fallen into such poor condition that it had to be heavily renovated in time for the 1967-68 season. As a condition of getting the expansion franchise, Blues owner Sid Salomon Jr. purchased the Arena from the Chicago Black Hawks, and spent several million dollars renovating the building and adding some 3,000 seats to bring the total to almost 15,000. It never stopped being renovated from that day on, and held almost 20,000 seats by the time the Blues left the Arena in 1994. Many fans considered its sight lines the best of any arena in the league, which is remarkable considering that it was not originally built for Hockey. It was also known as one of the loudest arenas in the league.