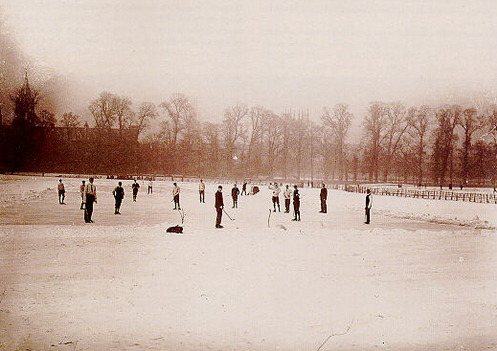 The photo, above, is presumably of the Oxford University Ice Hockey Club team training on Christ Church Meadow. This is the earliest known, extant photograph of Bandy/ice Hockey in Britain

The Oxford and Cambridge Ice Hockey Clubs (OUIHC and CUIHC) both claim their origin in 1885 when a Varsity Match is believed to have taken place in St Moritz—a fact that has been as fiercely guarded as it has been promoted. Indeed, prior to the 1985 Varsity Match, the International Ice Hockey Federation (probably due to pressure by then President of the British Ice Hockey Association—and former Light Blue goalie—Fred Meredith) formally recognized the match and presented each team with a plaque to commemorate the occasion.

This distinction technically makes the Dark and Light Blues the oldest ice Hockey clubs in Europe and among the oldest in the world.

However, no records exist of this match beyond a score 6-0 in favour of Oxford. Hockey historians are unanimous (with the sole exception of Fred Meredith) in their opinion that while there was probably a Varsity Match in that year, it was bandy (a similar game with more players and a larger ice surface) not ice Hockey that was played.

The Oxford Blues are striving to establish the precise date of the team's foundation and have some evidence to suggest that the OUIHC may actually have been established as early as 1879, although it would have been a bandy team at that time—bandy teams were commonly called "ice Hockey" clubs, for that was what they essentially played, (field) Hockey on ice.