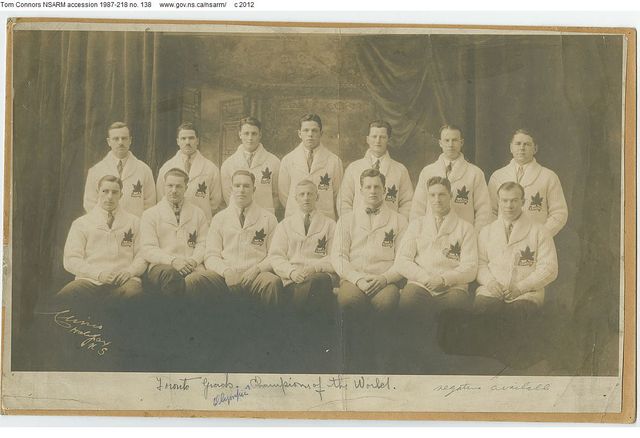 Team Canada / Toronto Varcity Blues / Toronto Varsity Grads - 1928 - Team photo taken in Halifax, Nova Scotia before the steamship journey to europe, and the 1928 Winter Olympics in St. Moritz, Switzerland - Canada would win the Gold Medal - The Toronto Varsity Grads were organized as a senior team by a group of University of Toronto graduates in 1926.
They played in the Ontario Hockey Association's Group 2 -

They finished with an amazing 11-0-0 record in the season and then won 3 and tied 1 of four Ontario playoffs games. They continued their amazing streak in the 1926-27 Eastern Canada Allan Cup Playoffs with 4 wins and a tie in five games -

They were then chosen to represent Canada in the 1928 Olympics -

The Varsity Grads went on to win the Olympic Gold Medal -

The team was never revived after that win. But in just two seasons of play, they ended up with an Allan Cup and an Olympic Gold Medal