Mi'kmaq Hockey Sticks - Made by Charlie Young - Circa 1900 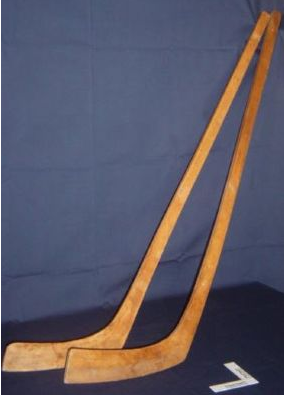 These sticks were used by Jack Chisholm (about b 1890 - d1960) who was well known in sporting circles for his participation and promotion of local athletics.

For many years these sticks were kept in a shed behind the Chisholm Shoe Store located on Main Street in Antigonish which Jack Chisholm operated. When the shed was being torn down, the sticks were rediscovered.

These Hockey sticks were manufactured in a small shop located at Antigonish Landing by Mi'kmaq craftsman Charlie Young. He and several native workers produced upwards of 300 dozen sticks each year. Many were shipped by train to various hockey centres throughout the Maritimes.

They produced sticks under the SWIPER brand. Charlie Young was born in Inverness about 1864, settled at the Antigonish Landing after having spent time within various native communities throughout Nova Scotia. His occupation was listed as a Cooper on 1881 census. He was married three times--first wife Agnes F; second Margaret Nevin, third Bridget Marshall in 1923, and he was father to several children. He died in bed of heart failure in 1939 at his home at the Landing. He was buried at Whycocomagh.

Charlie's son Tommy born in 1900 continued the manufacture of sticks well into the 1940's Not only did their small shop produce sticks, but small boats, handles for axes, picks, farm implements and tools. Several of the crosses which marked graves in St Ninian's Cemetery were made by these craftsmen.

Starr Manufacturing Company and others, bought sticks like these from the Mi'kmaq carvers in Tuft's Cove, Millbrook, Shubenacadie, Guysborough, and the Annapolis Valley native communities.