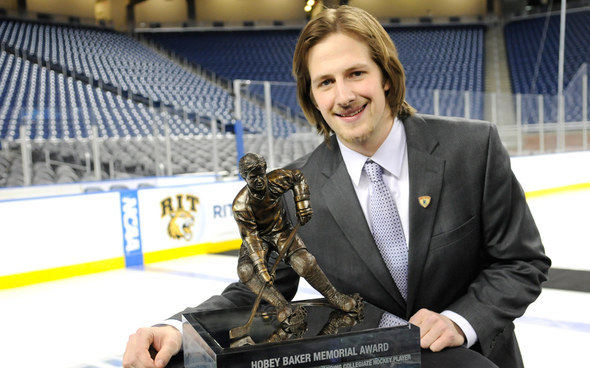 A fantastic senior year culminated in Blake Geoffrion winning the Hobey Baker Award, given annually to the best player in USA College Hockey - Geoffrion put up career highs offensively, ranking third in the nation in goals with 28 on the season. He also led the nation in power play goals with 15, and 22 assists to reach the 50 point mark - Making the win even more special is that Geoffrion became the first Wisconsin player in history to win the Hobey Baker Award - A graduate of the USA Hockey National Team Development Program, Geoffrion represented Team USA three times. He was a member of the gold medal winning team at the 2006 IIHF World U18 Championship and won bronze at the 2007 World Junior Hockey Championship. He moved on to the University of Wisconsin-Madison where he enjoyed a standout college career. He was a conference all-star in his senior year of 2009–10 - Geoffrion began his professional career in the American Hockey League (AHL) with the Milwaukee Admirals during the 2010 playoffs, and made his NHL debut on February 26, 2011. In doing so, he became the 1st fourth-generation player in the league's history, after his father Dan, grandfather Bernie and great-grandfather Howie Morenz. All four generations have played for the Canadiens