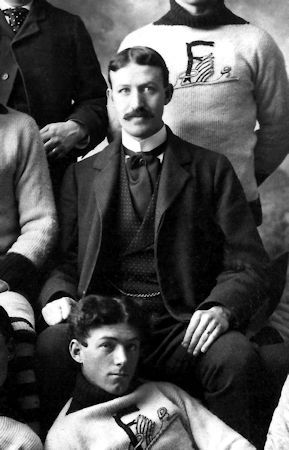 Often referred to as the “Father of Hockey”, Sutherland was an ardent supporter of the game who worked diligently on its behalf.

Sutherland made his hometown of Kingston a famous ice Hockey centre during the years prior to the First World War. As coach of the Kingston Frontenacs junior team, Sutherland guided them to several championships.

Sutherland served overseas with the Canadian Expeditionary Force during the First World War, reaching the rank of Captain.

Sutherland first became connected with the Ontario Hockey Association as a district representative, and his drive and keen interest shot him up through executive ranks until he became president in 1915, holding the position until 1918. In 1919, Sutherland served as the President of the Canadian Amateur Hockey Association.

Sutherland was instrumental in the founding of the Memorial Cup in 1919; the tournament serves as the championship of the Canadian Hockey League. He also helped establish the annual exhibition match between the Royal Military College of Canada and West Point in 1923.

Sutherland was the driving force behind the creation of the International Hockey Hall of Fame in 1943, and a major reason why the National Hockey League and the Canadian Amateur Hockey Association selected Kingston as its original home.

The International Hockey Hall of Fame took his honour one step further by naming one of the display halls after him.

Sutherland was inducted into the Hockey Hall of Fame in December 1947.